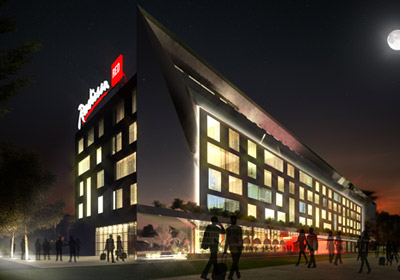 The brands are being rolled out by the Carlson Rezidor Hotel Group, a venture that Carlson created in 2012 with a European partner, the Rezidor Group. Its portfolio currently includes more than 1,340 hotels in operation or under development in more than 100 countries. The company and its various brands employ roughly 88,000 people.

The new brands are being introduced as Carlson continues to execute a previously announced “Ambition 2015” growth plan, with a goal of reaching 1,500 hotels by 2015. The company said its new hotels are part of its “Vision 20/20” plan, an extension of its ongoing growth strategy.

In fact, Carlson said it aims to have more than 60 Radisson Red hotels and 20 Quorvus Collection hotels by 2020.

Radisson Red (see renderings below) will launch in 2015 in various locations in the Americas, Europe, the Middle East, Africa, and the Asia Pacific, Carlson said. A Carlson spokesperson said the company is not yet announcing specific locations for the Radisson Red hotels, and the company did not specify what areas it is targeting with the Quorvus Collection.

Carlson said the Radisson Red “seeks to create a new industry category” called “Lifestyle Select,” which will focus on integrating technology. For example, a mobile application will allow guests to skip reception for checking in and also allow them to order food and drink, taxis, and more. Carlson described the brand as “an upscale, select-service concept.”

The Quorvus Collection, meanwhile, will essentially be a curated group of luxury, five-star hotels. Carlson said each will feature distinct styles, history, and architecture but offer comparable services.

Carlson said it expects to unveil during the second quarter of this year the first hotels that will be counted among the Quorvus Collection. The brand has “strong growth ambitions,” the company said.

The Star Tribune pointed out that, while its public perception has been improving, the Radisson brand remains fairly low among the upscale lodging category in the minds of some consumers. But Radisson has been expanding its presence in the luxury category with the addition of its Radisson Blu brand (including a location at the Mall of America.)

When announcing its new hotel plans, Carlson Rezidor also said that 2013 was its “most successful year for development globally since 2008.” Its revenue climbed 4 percent to $7.5 billion during the year, the company said.

Here are more renderings of the Radisson Red concept: