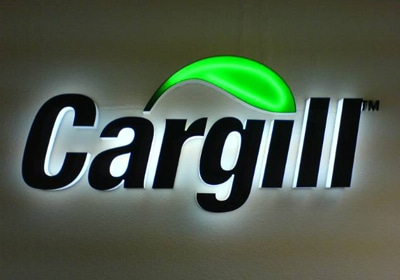 Cargill, one of the world’s largest private companies, reported declined earnings in all four of its major business sectors.
January 17, 2016

An unseasonably warm winter and South American turmoil are largely at fault for Cargill’s double-digit decreases in profits and revenue during its fiscal second quarter, the agribusiness giant said on Thursday.

During the three-month period ending November 30, 2015, the Minnetonka-based company reported lessened earnings in all four of its business sectors. Cargill’s profits shrank 13 percent, from $657 million a year ago to $574 million. Second quarter revenue fell to $27.3 billion, a 10 percent drop from its roughly $30 billion in revenue during the same period last year.

Cargill’s animal nutrition and protein division took a hit due to Australia’s declining cattle supply and difficult economic conditions in North American cattle feeding. As a positive, the Thanksgiving holiday pushed whole-turkey sales volume along with strong poultry results in Central America, Europe, Thailand and the U.S. Overall, decreased profitability in animal nutrition and protein were slight thanks to growth in aquaculture nutrition in Latin America.

As for its earnings in the food ingredients and applications sector, Cargill said its results “slipped below” last year. While weakening currencies hurt its staple food sales, starches, sweeteners chocolate and edible oils remained profitable. Salt earnings were down from a lack of need for road salt and de-icing products due to North America’s mild winter. (Meanwhile, 17 miners were recently trapped in Cargill’s salt mine in New York. All 17 workers were saved this morning.)

The unseasonably mild temperatures have also affected Cargill’s industrial and financial services sector. Typically, cold weather has lead to demand for natural gas and power, but that has not been the case this year, leading to significant reduction in profits in this division for Cargill.

As of November, 30, 2015, Cargill said it has stopped consolidating its Venezuelan operations. Cargill, which is one of the world’s largest private companies, has taken this action due to an inability to convert Venezuelan bolivars to U.S. dollars or pay U.S. dollar dividends. Additionally, Cargill has found there to be “a decreasing ability to exercise operational decision-making authority” in Venezuela in its current state.

Lisa Clemens, a spokesperson for Cargill, said the change in Venezuela won't directly impact its operations there. Cargill has maintained operations in Venezuela for 26 years with a workforce of about 2,000 people that help produce animal nutrition products and branded staple foods such as flour, pasta, oils and sauces. Clemens added that Cargill will “continue to manufacture these products and serve our customers there.”

To offset some of its losses, Cargill cited the financial gains from its $1.45 billion sale of its U.S. pork business to JBS, a Brazil-based global meat provider. Similarly, Cargill’s $740 million sale of its 50 percent stake in North Star BlueScope Steel aided its second quarter outcome.

According to a statement by Cargill CEO David MacLennan, “Cargill posted a solid second quarter against a strong comparative period in the prior fiscal year.” After its first quarter purchase of EWOS, a global salmon feed producer, and new chocolate operations, MacLennan believes each division within Cargill “is well positioned for growth with an industry leader.”