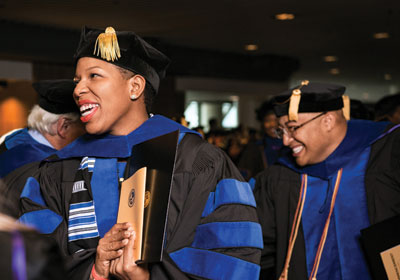 Capella will lose some corporate jobs in Minneapolis, but the count is not known.
By Burl Gilyard
October 30, 2017

Minneapolis-based Capella Education Company and Herndon, Virginia-based Strayer Education Inc. will merge in an all-stock deal announced on Monday morning. The deal means the loss of a notable corporate headquarters for Minnesota: the combined company will be based in Herndon, Virginia. But according to the joint announcement, “the company will maintain a significant presence in Minneapolis, Minnesota, including the headquarters of Capella University and the combined entity’s IT resources.”

While the deal is essentially a merger of equals, Strayer is technically the buyer. Strayer shareholders will own 52 percent of the combined company and Capella shareholders will own 48 percent. The Capella name is not going to disappear. According to the statement: “Strayer University and Capella University will continue to operate as independent and separately accredited institutions, together serving approximately 80,000 students across all 50 states.”

Capella currently has 1,200 employees in downtown Minneapolis, where the company is based in Capella Tower. Capella spokesman Mike Buttry told Twin Cities Business that legal, human resources, finance and public affairs operations will be based in Virginia.

“There will be some corporate jobs impacted,” said Buttry, but no numbers or estimates have been disclosed.

The deal has been in the pipeline for some time: the companies initiated discussions about 18 months ago. Buttry said that the transaction is expected to close in summer 2018. Kevin Gilligan, currently chairman and CEO of Capella, will become vice chairman of the new company.

Recent years have been challenging for many for-profit educators. The industry has come under criticism for overselling job prospects for graduates, who often build up large amounts of debt. Corinthian Colleges Inc., which once had more than 120 campuses across the U.S., went out of business in 2015 after filing bankruptcy.

In terms of revenue, the companies are roughly the same size. Capella reported revenue of $429.4 million for 2016, an increase of 3.1 percent compared to 2015. The company’s net income of $40.2 million, however, marked a 6.5 percent decline.

But Strayer’s sales have declined significantly in recent years, while Capella has been holding its ground and seeing modest gains. For 2012, Strayer posted revenue of $562 million. Its revenues for 2016 represent a 21.5 percent drop since then. Capella, on the other hand, has seen its revenue climb 4.6 percent since 2012, when its sales were $410.6 million.

For the second quarter of 2017, Capella reported revenue of $109.6 million, a gain of 2.7 percent. Capella’s revenue of $221.4 million for the first six months of the year reflects a 4.3 percent increase compared to 2016. For the first two quarters of the year, Strayer reported $227.6 million in revenue, up 3.6 percent for the same period a year ago.

Capella was founded in 1991 and officially became an online education pioneer, focusing on graduate-level degrees in 1993. The company acquired two coding schools in 2016 as part of an effort to adapt to market shifts. Twin Cities Business took an in-depth look at Capella and changes to the for-profit education industry in mid-2016.