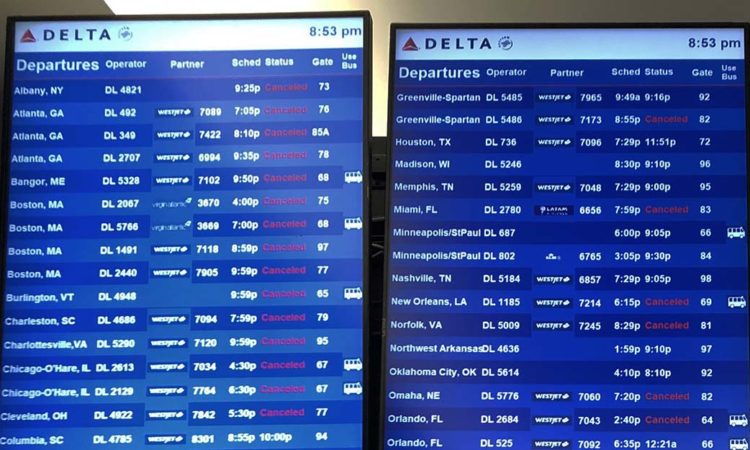 On Thursday night at New York’s LaGuardia Airport, the departure board showed that Delta Air Lines had canceled 38 of its 56 afternoon and evening flights.

Previously known for smooth operations, Delta is struggling to adequately staff and complete flights on time.
By Liz Fedor
June 21, 2022

A seven-hour flight delay is exhausting, but it’s better than getting stranded at the airport after your flight is canceled.

That was my experience Thursday, when I was scheduled to leave New York’s LaGuardia Airport at 3:05 p.m. EDT on a Delta Air Lines flight and arrive in the Twin Cities at 5:15 p.m. CDT.

Our flight ultimately arrived in the Twin Cities around midnight local time, and I was extremely grateful that my flight actually was operated.

Just a few weeks ago, New York’s Gov. Kathy Hochul joined Delta CEO Ed Bastian to celebrate the opening of a gleaming new terminal at LaGuardia, a massive project that had been in the works for several years.

But there wasn’t anything bright and impressive on Thursday at my Gate 84 and adjoining gates in an old part of the airport, where passengers wait for their flights in one big seating area. Delta was struggling with operational issues, and flight delays and cancellations were mounting.

The Atlanta-based carrier had been plagued by flight disruptions over the Memorial Day weekend. In the past several days, another rash of cancellations and delays surfaced.

On the day that I was attempting to return from New York after a 48-hour leisure trip, Delta pilots were in New York City to picket outside of Delta’s annual shareholders meeting.

On June 15, the eve of the shareholders meeting, the Delta unit of the Air Line Pilots Association (ALPA) sent a letter to Delta’s board of directors.

“We have lost confidence in Delta Flight Operations, Crew Resources, and Flight Training and Standards; and we are concerned for the long-term health of Delta Air Lines,” said the letter from the executive council of the Delta pilots union.

“Our management’s poor decisions have led to inadequate staffing, fatiguing schedules, and an unreliable operation,” the union letter said. “We implore you, the Delta Board of Directors, to demand a higher level of accountability from our management teams.”

However, that stellar track record built over several years hasn’t been top of mind in June.

“Delta’s operational reliability and outstanding reputation is suffering,” the pilots union said in its June 15 letter. The pilots are in negotiations for a new collective bargaining agreement. Their last contract with Delta was signed in 2016.

To emphasize their unhappiness with the state of Delta’s operational performance, the pilots published a letter to Delta Air Lines customers to make their argument that the airline is scheduling more flights than it has the staff to operate them.

“We have been working on our days off, flying a record amount of overtime to help you get to your destination,” the pilots letter said. “At the current rate, by this fall, our pilots will have flown more overtime in 2022 than in the entirety of 2018 and 2019 combined, our busiest years to date.”

Consumer advocates also haven’t been shy about spotlighting Delta’s woes. “After a decade of positioning itself as the most reliable carrier, Delta has canceled more Sunday flights than American, Southwest and United combined, per FlightAware data,” wrote Kyle Potter, editor of Thrifty Traveler, in a recent tweet. “And this isn’t the first time. All airlines are struggling, but Delta’s whole brand may be at stake now.”

After a decade of positioning itself as the most reliable carrier, Delta has canceled more Sunday flights than American, Southwest & United combined, per FlightAware data.

And this isn’t the first time. All airlines are struggling, but Delta’s whole brand may be at stake now.

In a Monday post on his View from the Wing blog, Gary Leff wrote: “Things are rough for passengers out there. Cancellations mount. We expect that from some airlines, but it’s become universal, even for the once-reliable Delta.”

Leff, who has a business traveler audience, is critical of Delta and other airlines for cutting a substantial number of staff during the pandemic even though they received large federal payments to keep employees on airline payrolls.

In a late May column focused on Delta, Leff questioned the competency of Delta management. “Current leadership may not be well-suited to fixing the problem—in other words, that it isn’t just a blip and new hiring and flexibility in schedules alone may not solve the problem,” Leff concluded.

Leff noted the impact of the late 2020 departure of Gil West from Delta. A 12-year veteran of Delta, West was the airline’s well-regarded chief operating officer. He’s now working for a subsidiary of General Motors.

On Delta’s website, an article on customer service was updated Thursday to explain what the airline is doing to improve customer service. Delta stressed that passenger demand has been rising.

“Rebuilding Delta’s operation to serve the increasing number of customers who want to fly with us has been an enormous feat—and not without challenges,” the carrier said.

It emphasized its May 26 announcement that it was strategically shrinking its summer flight schedule “to build additional resilience in our system and improve operational reliability for our customers and employees.”

John Laughter, Delta’s chief of operations, also weighed in. “This phase of our recovery has been the most difficult. We’ve never had to bring the airline back at this speed before,” Laughter said in the Delta company article. “Through this challenge, we continue to make decisions that allow us to run a good, safe operation while restoring our network, and to take care of our people and customers.”

In Delta’s website article, it said the carrier is “adding several hundred new pilots and flight attendants to the operation monthly as we hire and train to support our growth.”

The airline also pledged to quickly notify customers of itinerary changes. “If a schedule change or delay impacts an upcoming flight, we’ll send updates directly to a mobile device or by email,” the airline said.

Of course, bad weather will affect any airline’s performance. If air traffic controllers restrict the volume of flights at a given airport, that also can disrupt an airline’s scheduled flights.

On my flight, we were supposed to start boarding at 2:25 p.m. We had an airplane, and we had a pilot crew. We didn’t have any flight attendants, so we couldn’t get off the ground.

The captain on our flight didn’t want the gate agents to bear the brunt of passenger frustration. So he got on the gate intercom to explain what was going on. “I will only tell you the truth,” the captain said, which I found refreshing. He outlined what the plan was, so we knew that our fate hinged on a flight attendant crew reaching us. He didn’t make false promises. He shared new information as he received it.

Yet drama and uncertainty started to build as the evening wore on. From our waiting area for multiple gates, passengers were aware that a flight couldn’t depart for Miami from Gate 83 until that flight also had a flight attendant crew.

At 8:15 p.m., an announcement was made that the flight to Miami was canceled. It prompted a woman passenger to explode into a tirade at the gate agents. A middle-aged man started swearing at a female gate agent, who then barricaded herself behind the locked door to the loading bridge. Extra Delta personnel showed up at the gate within minutes, as did two Port Authority police officers.

For my Twin Cities flight, passengers were waiting for a flight attendant crew that was scheduled to arrive at LaGuardia on a flight from Hartford, Connecticut.

To memorialize my airport odyssey, I took a photo of the Delta departure board at 8:53 p.m. At that point, the board listed 56 Delta afternoon and evening flights. The word “Canceled” was in bright red as the status for 38 of the flights, or a total of 68% of the departing flights. Until our plane was on the runway, I couldn’t be positive that our flight would be operated.

At 9:24 p.m., our flight’s passengers cheered and applauded when the flight attendants made it to our gate. They opened the door to the loading bridge at 9:30 p.m. so we could board our Airbus A319. Every seat on the flight was taken.

Under Federal Aviation Administration rules, our pilots still had enough flight duty time left to get us to the MSP Airport. It also had been a long, tiring day for the flight attendants. “We want to go home, too,” said one of the attendants.

I got to LaGuardia early on Thursday and cleared security at 11:30 a.m. EDT. My flight that was supposed to depart at 3:05 p.m. ultimately pulled away from the gate at 10:08 p.m.

When I walked through MSP Airport after my Delta flight landed, it was after 1:00 a.m. EDT on Friday. Before completing the airport trek to get my car, I checked my phone and saw that I had an email from Delta’s Customer Care.

“Your departure was delayed due to waiting for crew members arriving on a delayed inbound flight,” the Delta email read. “We have deposited 7,500 bonus miles into your account. This is not intended to put a value on your experience but is part of our apology for the inconvenience.”