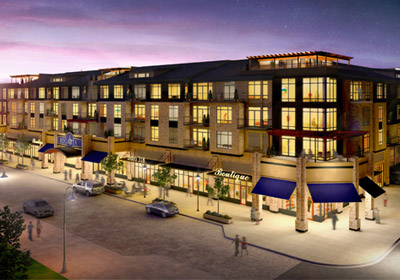 Can Condos Make A Comeback In The Twin Cities?

The luxury “Regatta” condos in Wayzata are one of just a few condo projects now underway.
November 03, 2013

Since the condo market crashed, there’s been close to zero new construction of new, for-sale residential condo units in the Twin Cities. But today there are signs of life in the new-condo market.

“We’ve set sail,” Steve Bohl, president and owner of BohLand Development, told Twin Cities Business. Condo prices in the Regatta project range from $450,000 to more than $2 million. The first units will be complete in December 2014 on the site near Lake Minnetonka.

Regatta is now only the third local condo project under construction amid an apartment building boom, which has thousands of new rental units in the pipeline.

Coon Rapids-based Shamrock Development, led by Jim Stanton, is currently building Stonebridge Lofts, a 164-unit condo project near the Guthrie Theater in downtown Minneapolis. Stonebridge Lofts is set to open in May. According to the project’s website, 106 of the units had been presold as of October 14. Another condo project under construction is the 22-unit ParkSide in St. Louis Park, the third and final phase of that project.

Bohl said that he has signed contracts for more than half of the Regatta condo units and that his average sale price so far is about $980,000. He said that his buyers in the affluent western suburban market want to own, not rent, property.

“I think we hit the center of the target on this market out here,” Bohl said. “As the crow flies, you’re half a block from the lake. I think it’s really the community in Wayzata that people are drawn to.”

The condos are one element of the Promenade of Wayzata, a major redevelopment of the former Wayzata Bay Shopping Center site, which has a total budget of more than $200 million. The larger project will include senior housing, new retail spaces, and a hotel. Roseville-based Presbyterian Homes & Services is the master developer of the larger project.

There are other, boutique-scale condo projects on the drawing board, including Linden Crossing, a 16-unit project planned in the Linden Hills neighborhood of south Minneapolis.

But not everyone is convinced that the condo market is back.

“At this point in time, we’re very cautious about the condo market,” Sherman said.

Sherman has developed both condos and apartments over the years, and currently has several local apartment projects under construction.

Sherman Associates just started construction of a 140-unit apartment project at 324 First Street North in the North Loop area of downtown Minneapolis. The site is well-known in real estate circles as the proposed site of the Reserve, a never-completed condo project. Construction on the project stopped in 2003 and never resumed, leaving only a foundation on the eyesore site for the last decade. The site is one of many former proposed condo sites that are now home to apartment projects.

But Bohl is bullish on the western suburbs and is scouting other sites for another condo project.

“I’m diligently looking for another piece of property,” Bohl said.