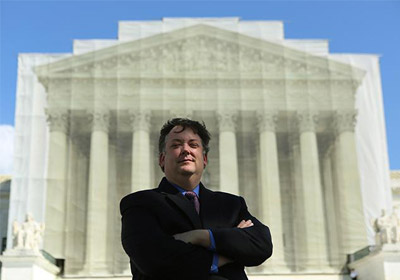 The Supreme Court's ruling in favor of Republican donor Shaun McCutcheon was another signal to advocates that the Roberts court will be receptive to challenges to campaign finance laws.
May 01, 2014

Minnesota is the latest front in what has developed into a national fight over federal and state campaign finance laws whose ultimate target may be the laws restricting how much individuals can give to political campaigns.

Last week, a group of citizens and lawmakers filed suit [PDF] against one of Minnesota’s campaign finance laws limiting the number of big-dollar donations candidates can receive from so-called “special sources”—political action committees, lobbyists and donors willing to make the biggest legally permissible contributions to campaigns.

The law applies only to state elections, as do many of the other campaign finance lawsuits in the works or on the way (federal candidates are regulated by federal law).

The lawsuit came just a few weeks after the U.S. Supreme Court struck down the overall limit on how much donors can give to federal candidates in an election cycle. Though the lawyers behind the Minnesota suit said they were planning it before the McCutcheon decision [PDF], the ruling accelerated their timeline for filing the complaint.

Even if the Minnesota lawsuit isn’t a direct result of McCutcheon, it continues a trend experts say began around the time the John Roberts-led Supreme Court began knocking down campaign finance regulations in the mid-2000s: more legal challenges to federal and state laws, and more deregulatory orders from the courts.

Minnesota has what are called “special source limits” governing how much money candidates can receive from PACs, lobbyists and “large contributors,” or individuals who give more than half the base contribution limits for state races (the base limits in the 2014 cycle are $4,000 for a gubernatorial candidate and $1,000 for House races).

The law sets a cap on how much a campaign can recieve from these contributors each cycle: $730,200 for gubernatorial candidates and $12,500 for state House candidates this year. Once a candidate hits that cap, PAC and lobbyist money is banned and individuals are restricted to giving half the base contribution limit.

The rules are unique to Minnesota, and the petitioners in the lawsuit argue they violate the first amendment rights of both candidates (who cannot accept as much money as they might be able to if the cap wasn’t in place) and donors (who, unless they donated before candidates hit their cap, can’t give as much as money as they would like).

Paul Sherman of the Institute for Justice, which is litigating the case, said his group generally doesn’t challenge contribution limits, focusing mostly on political action committee regulations around the country. He said the special sources lawsuit was coming before the McCutcheon ruling came down, though there is a section of the complaint reiterating what the Supreme Court held in McCutcheon—that contribution limits can only be used to prevent quid pro quo corruption and are otherwise a burden on free speech.

Laws around the country

Minnesota’s special source laws are fairly unique, though Sherman and others said there are several other state laws that could fall under the court’s interpretation in cases like McCutcheon and the four-year-old Citizens United [PDF].

Wisconsin has aggregate limits on contributions similar to the federal rules the court struck down in McCutcheon, for example. In Illinois, corporations and labor unions have contribution limits like those overturned in Citizens United. Los Angeles County restricts contributions to $300, unless candidates abide by a $1.4 million spending limit, in which case the contribution restriction jumps to $1,500.

All these laws could conceivably face legal challenges.

“There's nothing in the [McCutcheon] decision itself that says you can’t go after contribution limits, but it does say that these contribution limits have to have some rationale behind them,” said David Keating, the president of the Center for Competitive Politics. “I think the courts are going to apply a more skeptical eye to contribution limits generally.”

Lawsuits against these laws aren’t some post-McCutcheon or post-Citizens United phenomenon, but Tara Malloy, the senior counsel at the Campaign Legal Fund, said they have become more prevalent since George W. Bush appointees John Roberts and Samuel Alito joined the court and instituted a more conservative interpretation of campaign finance challenges.

In 2006, the court struck down a Vermont law setting contribution limits for donors and spending limits for candidates. The following year, justices lifted a federal ban on campaign ads from unions and labor organizations in the months leading up to an election. In both cases, the court ruled against the laws on first amendment grounds.

“Once they staked out their position, at that point we saw a huge surge in challenges to campaign finance laws, federal and state,” Malloy said.

Citizens United “added a lot of fuel” to the fight over campaign finance regulations and Malloy said there was a jump in cases afterward. She said she expects the same after McCutcheon.

All that being said, experts say the court isn’t looking to move too quickly on the highest-profile campaign finance regulation: limits on how much individuals can give to campaigns.

The court kept those limits intact in McCutcheon, but Democratic lawmakers are especially worried they might be the next to fall. Rep. Keith Ellison said last week the ruling could make it harder to justify individual limits in the future. Rep. Tim Walz said the ruling was “another step in the direction” of losing the base limits altogether.

“I think the next logical step is they’ll take the caps off altogether, and then it’s a free-for-all,” he said.

But there is one big practical reason that won’t happen any time soon: there isn’t a lawsuit challenging the caps yet, Malloy said. And the Supreme Court isn’t exactly rushing to take up other campaign finance cases right now. Justices had the chance to consider an Iowa ban on corporate contributions this year but declined.

Still, Malloy said the court’s ruling in McCutcheon sets the stage for courts to more closely scrutinize campaign finance laws, and “if lower courts read between the lines in McCutcheon, that could be problematic for all contribution limits.”

Keating agreed that the limits were safe for now. But he said, “I imagine it happening in the next ten years … it’s something that should happen.”

“The court is definitely trending in the direction of a more libertarian, more free speech approach,” the Institute for Justice’s Sherman said. “The Roberts Court has been moving in a deregulationist direction. … I don’t think that they should change course.”

This coverage is made possible by a grant from The Joyce Foundation.

Effective Democracy is a year-long series of occasional reports supported by the Chicago-based Joyce Foundation, as part of a grant made to MinnPost and the Wisconsin Center for Investigative Journalism.