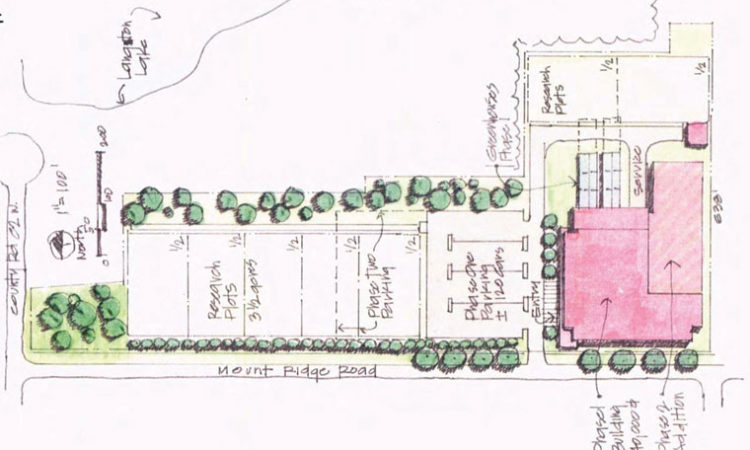 Currently based in New Brighton, Calyxt first revealed plans to build a 40,000-square-foot headquarters building in December 2015, obtaining a conditional use permit from the city of Roseville shortly thereafter. The project called for the purchase of a 10-acre parcel – a portion of the long-vacant PIK truck terminal property in on the southeast corner of County Road C2 West and Mount Ridge Road in the Ramsey County suburb.

The area is considered a “brownfield” redevelopment site due to what has been described as a moderate amount of soil contamination left over from its years hosting a freight terminal.

Calyxt’s plans call for the new building, which will combine administrative offices with extensive plant molecular biology labs. It will join already-completed new greenhouses and up to five acres of test agricultural plots similar to those maintained by the U of M at its St. Paul campus.

The company has received funding from the Minnesota Department of Employment and Economic Development’s Job Creation Fund Program for the effort. It had 24 full-time employees as of early 2016 and projects creating an additional 69 jobs at an average annual salary of $62,000.

The HQ plans were clarified by Calxyt in its IPO documents. They disclosed that Calyxt in January signed an agreement with an unnamed third-party developer “for the sale and leaseback” of its newly built greenhouses and warehouse facility at the Roseville site.

More significantly, it was also revealed the new 40,000-square-foot R&D building would be built and owned by the unnamed developer under a construction agreement, with Calyxt planning to sign a 20-year lease for the facility. In the filing, the company said it now plans to occupy the entire facility by “early 2018,” although it added there “is no guarantee” it will consummate these agreements with the builder.

The company spokesman declined TCB’s request to identify the developer.

Such sale-leaseback agreements are typically used by companies seeking to custom-build new facilities but which don’t want to invest the time and money to maintain them. Their solution is to hire a third-party developer to construct and own the new buildings, and then execute a long-term lease for the their use.

Calyxt is built around the “TALENs” gene editing technology licensed from the University of Minnesota. TALENs’ inventor is Calyxt co-founder and chief scientific officer Dan Voytas, a U of M plant genomics professor.

The TALENs method produces plants regarded as non-GMO. That’s because unlike controversial GMO foods, there is no introduction of foreign DNA into the plant genome, such as is done to enhance the ability to crops to resist pesticides. Instead, the TALENs process is used only to strategically deactivate genes to achieve desired traits, such as to produce less fat in a soybean, and thus is seen as essentially no different from naturally occurring mutations.

Company officials, and now public investors, see Calyxt as a “pure player” in the field of gene editing in the agricultural space. It is aiming for a 2018 commercial launch of a potentially groundbreaking new type of soybean for use in non-trans fat oils.