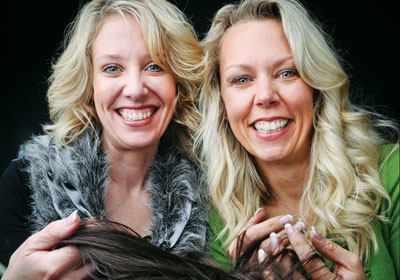 Rachel Knutson and Lisa Rudquist can rattle off everything you ever (and never) wanted to know about lice: It only takes 30 seconds of head-to-head contact for transmission to occur. Lice like clean hair. They can deposit eight to 10 eggs daily, which gestate for up to 10 more days. The itching becomes overwhelming.

The two have treated more than 3,000 cases since they launched their lice elimination business, Ladibugs, in May 2010. Both are registered nurses whose children had contracted lice. They were frustrated about the lack of available options and resources for parents—and they turned that frustration into an opportunity.

Their small treatment facility in a St. Louis Park industrial park setting is inviting, with brightly colored walls and numerous thank-you notes from kids that adorn two mirrors. Yet it’s the site of serious extermination. Most customers opt for a $189 treatment involving a device that kills the bugs with heat.

In addition to treating a family’s kids, the duo and their five employees have treated moms, dads, aunts, grandmas, even a grandpa. The worst case they tackled involved millions of nits, or louse eggs, that covered every strand of hair from shaft to end.

For clients willing to pay extra, Ladibugs will bring the Louse Buster to your home or stop by for a comb-through, a head check, or advice on decontaminating household items—a massive undertaking after lice enters the home. Educating people about lice is a major part of the founders’ mission.

Ladibugs came to Jill Weller’s Savage home several times to do nit comb-outs on her six-year-old daughter and head checks on the rest of the family. “They saved me,” she says. “I feel like if we hadn’t found them, we would have gotten re-infested.”

In addition to providing removal services, Knutson and Rudquist have a Ladibugs product line consisting of all-natural, peppermint-scented products for lice prevention and elimination—and a stainless steel comb with microgrooves that they say is the “gold standard” for nit removal. The products are sold at Kids Hair locations in the Twin Cities and various salons and co-ops in 12 states. In early 2012, they say they’ll roll out products at several thousand locations of a prominent national chain.

In 2011, Ladibugs generated $100,000 in revenue from products and $80,000 in service-related sales—and the founders expect to add treatment locations and grow those figures considerably in 2012.