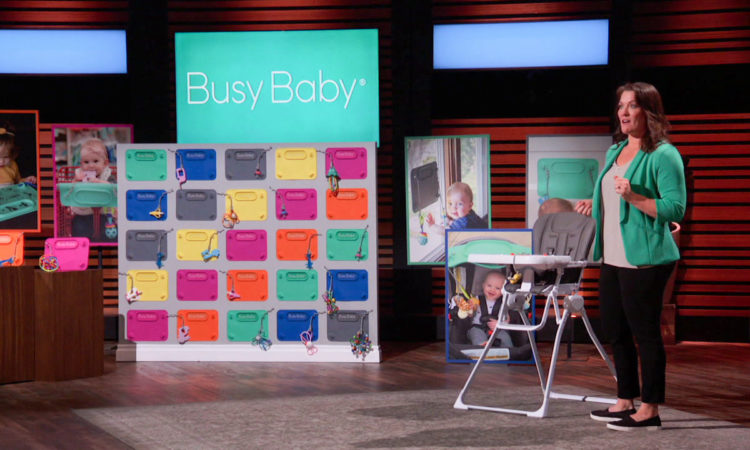 Beth Fynbo will pitch her non-slip silicone placemat to Mark Cuban and fellow sharks on a new episode of the ABC show airing Friday.
By Jenna Grundtner
March 04, 2021

Local entrepreneur Beth Fynbo’s Busy Baby non-slip silicone placemat impressed the judges at MN Cup, propelling her business to a division win in 2020. On Friday, we’ll find out if Mark Cuban and his fellow sharks share that excitement when Fynbo steps into the Shark Tank.

Her episode of the entrepreneurial reality show airs at 7 p.m. Friday, March 5 on ABC. Fynbo, whose business is based in Oronoco, Minn. near Rochester, can’t reveal if any investment offers were made. But she’s got 50,000 mats on hand to fulfill the expected post-show demand and is hosting a “fulfillment party” to package orders over the weekend.

Fynbo founded Busy Baby in late 2017 after the birth of her first child. A memorable lunch date with friends during which they spent most of the time bending down to pick up their 1-year-olds’ toys sparked the idea of developing a product that would prevent toys from falling (or being thrown) off a table or high chair.

In 2018, Fynbo, an army veteran, enrolled in a 12-week entrepreneurship course at Bunker Labs, a nonprofit that helps military vets and families build successful businesses. There, she was introduced to MN Cup, a startup competition hosted by the University of Minnesota’s Carlson School of Management.

By 2019, the first Busy Baby Mat was ready for retail. The 100 percent food-grade silicone placemat is equipped with four suction cups that stick to any smooth, clean surface, and the patented tether system attaches toys to the mat to eliminate that dreaded game of fetch.

The Busy Baby Mat is sold direct to consumer, and through Amazon. (Fynbo warns consumers to watch out for an Amazon knockoff—she’s tried it and determined it’s easily breakable, making it a dangerous choking hazard for children.) Busy Baby is also available at about 25 retail stores nationwide, including at Baby Grand in St. Louis Park.

Last year, Fynbo hoped to focus on in-person retail, but in true 2020 fashion, that plan was quickly canceled due to the Covid-19 pandemic.

“I had all this product and I had all these expos booked, and there were no stores to sell to and no expos to travel to,” Fynbo said. “That’s when a huge turn happened for me; I took my travel budget for expos and I put that into Facebook marketing.”

It paid off: Busy Baby surpassed $900,000 in sales in 2020—a full 900 percent increase from the year prior. At its current pace, Fynbo projects Busy Baby could reach $4 million in sales this year.

“I just doesn’t seem real,” said Fynbo, who still has a day job with a medical distribution company. Her brother Eric, a father of four and fellow army vet, recently quit his job to join the business full-time.

Although they aren’t on the payroll yet, Fynbo’s two sons, Christian (4) and Olyn (1), serve as constant inspiration for Busy Baby. By the time the first mat was prototyped, Christian was past the throwing stage, but Fynbo says Olyn has become her “marketing baby,” main product tester, and even retail packaging model.

“With Olyn, I’ve actually gotten to use my own product for the first time,” Fynbo said. “And all these things customers have written in reviews and emails—‘this thing is a game-changer’ and ‘how did I survive without this before’—I’m experiencing myself and feeling the same way.”

The Shark Tank call came last fall, in the midst of surging sales and the MN Cup win, which includes $30,000 in prize money and more publicity. Fynbo had applied several months earlier—pre-Covid-19—on the suggestion of someone she met through Bunker Labs. Fynbo flew out to Las Vegas to film her Shark Tank segment in September. She quarantined in The Venetian hotel bubble for eight days, passed three Covid tests, and even ran through her official rehearsal over Zoom.

“The day that I walked on the set to film was the first time I ever saw the stage—other than the probably 250 episodes of Shark Tank I binge-watched in preparation,” Fynbo says. “It was exactly like you see it on the show.”

Although she can’t reveal if any offers were made, she can say who her surprise favorite shark was: Mark Cuban.

“He was rooting for me and made me feel on top of the world about the job I’ve done to get to this point,” Fynbo said. “The guy who I thought would be the least interested in me and my product ended up being the most supportive and amazing.”

Busy Baby recently added a teething spoon to its product line and plans to release a mini mat this summer.

In good company: the Minnesota couple behind Dog Threads scored a deal on Shark Tank in 2019.