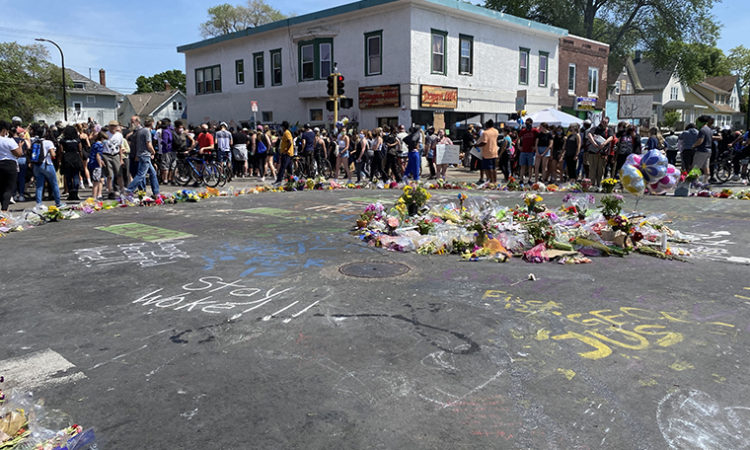 Many Minnesotans are at a loss for words after the death of George Floyd.

But some local leaders say the state’s business community can play a pivotal role in driving major changes. Tawanna Black, founder and CEO of the Center for Economic Inclusion, said businesses and business leaders do have an impact on policing. The center focuses on strengthening the Twin Cities region’s civic infrastructure and capacity to disrupt systems.

One place to start? Thinking about the influence of money and power, Black said.

The University of Minnesota, for example, will no longer contract with the MPD for specialized services or support for large events. And the YWCA Minneapolis, which rents space to the MPD for training, is considering cutting ties.

“Ultimately, we may cut ties with MPD, but first we want to provide them an opportunity to take an honest reflection of their culture and abhorrent and racist behavior toward people of color,” the organization said in a statement.

For businesses that don’t have money flowing directly to the MPD, Black suggested that they could use their influence with the city council, mayor, governor, and legislators to change public policy, budgets, and systems, like policing.

“We need business leaders to speak up loud and clear and say we need to uproot racism that exists within the institution. And we need them to use their influence in every place that they can,” she said.

Karl Benson, president and CEO of the Minnesota Black Chamber of Commerce, maintained that “change only comes to those in power.”

“Like most situations regarding power and racial equity, white people are not giving up power, especially to the Black business community,” he said in an email.

Another way leaders can further change is by examining the reasons they’re calling police, and then passing on those thought processes to all levels of the business.

“We need white business leaders and white people to drop their fear factor and start to bridge gaps, and for them to be the ones to take the first step––recognizing that black people’s lives in particular, and other communities of color, but in particular black people’s lives are on the line,” Black said. “So, in the meantime we need white people to do the hard work of addressing racism.”

A place to start is by examining one’s own implicit and explicit biases, said Kathryn Quick, an academic co-director for the University of Minnesota’s Center for Integrative Leadership.

“What is it that I’m regarding as suspicious and does that have to do with a prejudice on my own behalf?” Quick said. “And the essential message there is: Will calling the police help the situation?”

She encouraged people to think critically about whether police intervention would improve the situation. She also added that businesses and associations can take a stand against increased police presence in spaces.

“Policing that’s oppressive, or that’s abrasive, or that’s dangerous to a lot of people, is not what our community needs in order to actually have shared safety,” Quick said.

Examining bias extends toward hiring, too.

“We have to start getting more comfortable about who we are willing to hire,” Black said. “When we know that our criminal justice system is racially biased against black people, Indigenous people, and people of color, then we’re going to continue to have economic injustices, which are absolutely tied to criminal injustices. And so our business community has a significant role to play, in the injustices that are taking place in our community, and how to think about that.”

With many businesses damaged from the riots, state and federal funding will be vital, especially for businesses that were already severely impacted by the pandemic closures, like salons and restaurants, she said.

“Businesses have been ransacked, set on fire and smashed, and damage to residential homes occurred which displaced people,” Andrea Jenkins, vice president of the Minneapolis City Council, said in a statement to her ward. “There were outsiders of this community causing destruction. We relied on many of those businesses and services, and our community now lacks access to essential needs.”

And on the ground level, businesses and individuals can support black-owned businesses.

“They can be very intentional about spending dollars at black, Indigenous and businesses owned by people of color,” Black said. “Spending dollars with them, and making sure they’re spending enough that it helps those businesses generate more jobs through the region that are family-sustaining in their wages and benefits, so that it grows the economy.”

Black emphasized that every community deserves to thrive, not just commercial corridors and business sectors like downtown Minneapolis.

She also said businesses, CEOs, and other leaders need to clearly and strongly express themselves so that policymakers are emboldened to take actions.

“It’s not enough to say all caps are not bad. We know that. Nobody is arguing that. There are good cops, there are inclusive cops, and there are some that are bad, but we have systemic racism in a very big institution. And until there’s meaningful efforts placed toward addressing that systemic racism in the institution, we are all at risk, as we are experiencing right now,” Black said.