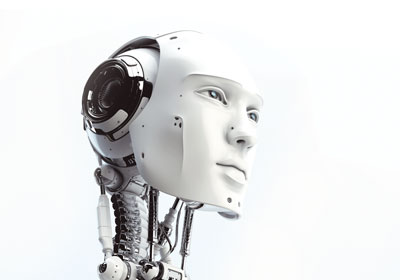 Businesses already are using AI to reach customers. The work is about algorithms, not automatons.
By Gene Rebeck
October 01, 2016

You can think of Lucy as the fastest marketing researcher on the planet. Minneapolis-based digital marketing and technology agency GoKart Labs “hired” Lucy in May and was quickly amazed. “When I asked a question of Lucy—it was a specific question about a client’s competitors—it found that information,” says Rob Rosen, GoKart’s director of digital marketing and analytics. “Even Google didn’t find that information in a clear way.”

Lucy can scour the internet and rapidly present marketing data and insights that Google can’t provide. In seconds, Lucy can pull together in one place useful information that GoKart staff would have spent hours tracking down from disparate sources. And Lucy can present that information in an easily digestible way, using graphs and charts as needed. “When I asked a question, sometimes it went a lot deeper than I expected,” Rosen says. “It came back with a lot more ideas and a lot of different types of questions and connections that I was able to make, even though it wasn’t the intent of the question I initially asked.”

You’ve noticed that Rosen refers to Lucy as “it.” In fact, Lucy is a digital “intelligent agent” developed by St. Louis Park-based marketing technology firm Equals 3, an IBM Watson ecosystem partner. Watson is often described as a supercomputer, but IBM refers to Watson as a cloud-based technology platform designed to gather huge amounts of information and digitally gathered data to make it quickly useful. And that means that Lucy is more than just an application. It’s an example of artificial intelligence (AI) that can answer queries, handle tasks and respond to requests—and be able to automatically improve its algorithms as it takes in new information. In other words, it can “learn.”

Lucy uses the data that is owned and licensed by a company—data that is private, secure and not typically available through public sources, such as Google, to produce insights and answer critical marketing questions, according to Equals 3. Lucy ingests more than 250,000 articles a day from about a thousand credible news sources. This enables it to capture brand insights and identify the latest trends.

Lucy is a digital “intelligent agent” developed by Equals 3, a marketing technology firm based in St. Louis Park. It captures brand insights for clients.

If the term “artificial intelligence” has you imagining the robotic humanoids of Blade Runner, think again. “AI is not a lofty, Matrix-esque technology taking over the human species and therefore not applicable to day-to-day business,” Trevor O’Brien, chief technology officer of marketing agency Deutsch, wrote on Forbes.com in August. “It is a piece of software that has the ability to teach itself, write its own algorithms and programs, and learn commands and communications over time. Instead of needing human input, the software develops itself.”

In business applications, practitioners use the terms “AI,” “machine learning” and “cognitive computing” almost interchangeably. Many in the field might make sharper distinctions among those terms, but as Equals 3 managing partner Scott Litman notes, “At the end of the day, it’s all about computers that are able to learn from the experiences they have.”

There’s no doubt that this is just the start of how AI or machine learning will affect businesses of all kinds. According to New York-based professional services firm Deloitte, the machine learning industry is expected to be worth about $80 billion annually by 2018. And in some fields—notably marketing communications, manufacturing and law—it’s already having an impact.

Perhaps the biggest leap for AI in the business world was IBM’s creation of Watson, a project that began a decade ago. In the public mind, Watson is best known for its “appearance” in 2011 on the quiz show Jeopardy!, where it defeated all human contestants, including the show’s most famous champion, Ken Jennings. Since then, Watson has gone from crushing its Jeopardy! opponents to a machine-learning platform.

“Watson solutions are being built, used and deployed in more than 45 countries and across 20 different industries including health care, financial services, travel, educational toys and legal services,” says Jonas Nwuke, Watson platform manager for IBM. “New applications are transforming how humans interact with technology, and how businesses and consumers make decisions. As a result, the Watson developer community is continuing to grow—not just in volume, but in the breadth of industry challenges the solutions tackle as well.”

Nwuke says, “The rise of big data and the world’s need to make sense of it all is what ultimately led IBM researchers to develop Watson.” He notes that 2.5 billion gigabytes of data are created every day, collected in software logs at retailers, mobile devices, cameras, item tag readers, sensors and other digital sources. With storage capabilities expanding via the cloud and other forms of technology, that data has become more accessible.

Lucy is taking advantage of that abundance of data, storage space and processing speed. All the marketing agency needs to do is ask Lucy to retrieve the data typing in natural-language queries. “Natural language” means that marketers don’t need to enter an elaborate code or a set of carefully chosen keywords. All they need to do is ask—for instance, “What is the predicted size of the AI market?” As Litman says, “It’s not that different than the way I talk to Siri, when I ask something like, ‘What time is the movie The Martian showing in Edina?’ or ‘How did Joe Mauer do last night?’ ”

Lucy is being offered via a software-as-a-service (SaaS) platform. Along with marketing companies like GoKart, Equals 3 is marketing the agent to Fortune 1000s and their outside marketing agencies. “When they buy [Lucy], we load up their data or connect to their licensed data so that Lucy can answer their questions,” Litman says.

Another example of a locally developed machine-learning application is NeuroMotics from Minneapolis-based technology developer Outsell Corp., which it introduced in 2015. During its 12 years in business, Outsell has developed and refined its software engagement platform for car manufacturers and dealerships nationwide for customers and prospects. NeuroMotics combines a core set of predictive models with machine learning to automatically and specifically target marketing messages tailored to individual customers.

“We learn about each consumer as an individual by tracking both their online and offline data across the web, as well as at the dealership,” says Sahil Merchant, Outsell’s director of marketing communications. The NeuroMotics algorithm can continue to refine itself as it sees more patterns and receives more data. As Merchant notes, a young customer might have once been looking for a sports car; “Four years later, he’s looking for a minivan.”

The idea, Outsell data scientist Corey Christensen says, is to “move the industry from a one-size-fits-all approach to marketing and customizing a very specific approach.” What makes this approach different from what’s called “automated marketing” is that rather than sending out a general message to a group of consumers via social media or email, a machine-learning algorithm can target the message for each potential customer.

“It’s very individualized for every person,” Christensen says. “Automated marketing is about sending out emails and tracking behaviors.” With Outsell’s algorithm, “the email we send to you would be wildly different from what we send to someone else.”

Though marketing applications appear to be the earliest adopters of machine-learning technologies, other industries are exploring how AI can help make better use of their data.

St. Louis Park-based Coherent Solutions Inc. develops custom commercial-grade software solutions. It works with small and midsize companies from a variety of industries, including health care, retail and e-commerce. It has been creating machine-learning applications for several clients.

So far, the IT firm has done most of its machine-learning work for its manufacturing clients. It has developed applications that can predict and thus potentially prevent equipment failure “based on the vast stream of data that’s coming from those units,” says Max Belov, Coherent Solutions’ chief technology officer. If a certain part gets too hot, for instance, a key piece of equipment won’t properly function. To anticipate such situations before they occur, Belov says, “We can build some machine-learning models that take into account some of these past trends and parameters and make predictions based on those.”

Belov says that Coherent is taking advantage of open-source and cloud-based AI solutions, such as the Google TensorFlow library of machine-learning algorithms that were open-sourced in November 2015, and the Amazon Machine Learning service. “We’re consumers of the [machine-learning] algorithms that we’re using to build intelligence into solutions that we provide to our clients,” Belov says.

For a manufacturing client, Belov feeds data into the algorithm “to make it learn”—allowing it to find attributes of the historical data and the outcome. He builds internal data structures the customized algorithm needs to recognize patterns. The model helps the engine determine that if it starts seeing some of the attributes of the incoming data, it can adjust its monitoring when something deviates from the model.

Belov contends that machine learning will have many other applications. Litman agrees, citing business situations “where teams are overworked,” particularly in industries where there are large sets of data to be analyzed and manipulated. “An artificial intelligent agent will allow them to do more,” Litman says.

One area where AI might be poised to provide that kind of intelligent agent is law. A Canadian company called ROSS Intelligence has introduced an AI “digital legal advisor” that uses Watson as a platform. Like Lucy, ROSS’s application responds to natural-language queries. The idea is to save time for law firms, which are finding that clients are less willing to pay for hours of research.

Many see the health care field as a good match for machine-learning applications. That’s particularly the case in rural areas where people live far from clinics. AI also could be deployed when a clinic visit isn’t needed. It’s possible that AI could be used to create virtual nurse-practitioners and health coaches. What might slow this development are concerns about patient privacy as well as the potential unreliability of the algorithm until it has “learned” enough about the patient’s specific condition.

“There isn’t a single industry that won’t be transformed by this technology,” Nwuke says. Because “natural human interaction is essential to the evolution of cognitive computing, our focus today is on making interactions between man and machine more seamless.”

Still think this is science fiction? Then consider this: In August, Uber announced it was introducing autonomous vehicles in Pittsburgh.