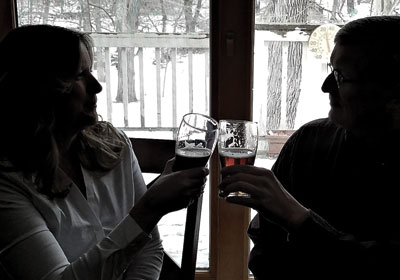 The couple behind Torg Brewery is bringing craft brews to an underserved part of the Twin Cities—and they want the community to help them build it.
January 26, 2017

Dave and Debbie Torgersen traveled the world during Dave’s career in the military, sampling—and enjoying—beers wherever they went. So it was a natural fit for the two to start home brewing as Dave began to reach retirement in 2015.

The hobby blossomed, and in just 18 months, the couple brewed 66 batches of beer. There was so much of it that they had to give it away to family and friends—it turned out to be a hit. The Torgersens realized their homemade suds tasted better than what many microbreweries in places like Seattle and St. Louis were producing.

Now the couple has their sights set on a loftier goal than simply brewing at home: They want to bring approachable, great-tasting beer to the northern Twin Cities suburbs.

“We vowed to take one year to prove why we shouldn’t [open a brewery],” Dave said. “In the end, we couldn’t find a reason not to do it.”

The Torgersen’s plan to open Torg Brewery, a two-floor brewing facility and taproom, in the Northtown Mall area of Spring Lake Park with an eye on a late 2017 or early 2018 opening.

Torg will offer what Dave calls “the middle ground” of beers. “We’re not going to chase the hoppiest thing out there or the highest-ABV beer,” he said. “We want the, ‘Hey, let’s have a couple pints after work’ crowd.”

The couple believes the northern metro in particular has an untapped market of beer drinkers that can be eased into the craft brewery scene with interesting—but not overwhelming—libations. They also think Torg could be a community gathering spot, not unlike LTD Brewing in Hopkins.

Torg will offer six beers when it opens. Two are what the brewery are calling “training wheel” beers: an American cream ale and an English brown ale. They’re light, sweet and meant to ease the average Bud Light drinker into the craft scene. Torg’s “flagship series” steps up the flavor with a sweet stout, English brown ale, American Pale Ale and an American IPA.

The brewery isn’t meant to be a draw for the hophead seeking out a triple IPA. But Dave Torgersen said that he thinks Torg’s approachability and relative geographic isolation from other breweries will make it a popular spot.

The business itself will stand out in several ways. Dave’s military service, which makes it a veteran-owned business, is one such example. Another is that Debbie is the head brewer, putting Torg in the slim 4 percent of breweries that have a female at the helm.

Debbie brewing expertise comes from serving as what she calls “head chef” of a family with a child that has a special dietary needs. She said she often had to take traditional recipes and give them a twist to make them something everyone can enjoy—and that’s the philosophy she brings to beer.

“Women have traditionally not been regarded as beer drinkers,” she said. “The home brewing phenomenon and craft brewing industry has radically affected this, both in consumer and career trends.”

Another thing that makes Torg unique: It will be among the first companies in Minnesota to take advantage of new equity crowdfunding rules, which allows them to raise money from non-accredited investors. Two other companies—both breweries—are also currently approved to start crowdfunding campaigns: Twin Cities-based Broken Clocking Brewing and Bluenose Gopher Brewing in Granite Falls.

Torg’s crowdfunding campaign aims to raise up to $600,000 to kick-start construction of the brewery, which represents 30 percent equity in the company at a valuation of $2 million. The minimum investment is $5,000, or a 0.25 percent ownership stake. They’re promising to double the distribution of returns to those who participate until they’ve recouped their investment.

Crowdfunding hasn’t yet started due to technical issues with the online portals used to raise the money, though Debbie Torgersen said they expect everything to be ironed out in the next few weeks.

The couple was drawn to the equity crowdfunding model because it invites participation from the community and naturally builds in a base of brand boosters. They pointed to the example of Northbound Smokehouse—a South Minneapolis-based restaurant and brewery—that promised free beer for life to those that chipped in $1,000—that now has a loyal following in the area.

“We think getting local money is the best, especially if you’re trying to build a community,” Dave Torgersen said. “We don’t need hundreds of big folks or big spenders. We want a family of people who are ambassadors who go to the bar every week and talk about it. That’s the direction we wanted to go.”