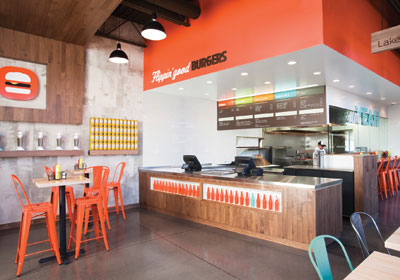 Branding Agency Fame Knows Where the Beef Is

Branding agency Fame expands its menu of services and puts one fork in the food game.
December 07, 2012

From its brand identity work for Minute Clinic to in-store displays for Target, Minneapolis-based retail branding agency Fame tends to embrace a clean, modern aesthetic, all with an air of fun and lightheartedness. The tone favors cheekiness: Its bus-stop posters for Blue & White Taxi featured a playful illustration with the tagline “Hammered?” “Pickled?” or “Sauced?” followed by the phrase “If you’re drinking, we’re driving.”

“People want to be charmed,” says Lynne Robertson, who’s been Fame’s president since 2004. “Our charge is to make them stop, look, listen, feel something.” Plus, cheekiness is memorable, making it an effective strategy for a company that’s trying to get inebriated folks to remember the message.

Fame has a history of entrepreneurial innovation. In the early 2000s, the agency operated a store called Once Famous in what is now the Canadian Pacific Plaza in downtown Minneapolis. Once Famous was known for its wall-mounted plasma screens with looped video of eyes watching customers as they browsed the boutique’s offerings, playfully reminding customers that the store’s main purpose was to watch them shop to get a feel for how they moved around the space, how they interacted with merchandise in the environment and with the environment itself.

Once Famous is closed now, but after a somewhat slow period (by no means unusual in the marketing business, particularly in the last few years), Fame is back, and growing. A big reason: adding more services.

“Our core expertise is making brands stand out in retail spaces and beyond,” says Robertson, who joined Fame in 2003 from Campbell Mithun. In the past few years, the “beyond” part has evolved. As Fame’s logo design, packaging, in-store signage, and other work in the store environment resonated with its clients’ customers, the clients asked the agency to apply that work to their other channels, be it TV and radio ads, direct mailers, online banner ads, or other direct digital outreach. Driven by this client demand, Fame started “grafting on” additional services, including, in 2012, public relations.

“Because we added talent and skill sets,” Robertson says, “we were able to kind of surround a client’s problems and solve them all at once.”

Adding these services helped Fame become New York–based holding company TBWA Worldwide’s fastest-growing firm in 2010, after seeing 65 percent growth in revenue over 2009. The agency also garnered several awards for its design and advertising work; those awards attracted talent to the firm, and that talent in turn attracted new clients. This year Fame entered another distinctive storefront opportunity when it became an equity investor in local restaurant chain MyBurger. Serial entrepreneur Larry Abdo and his sons had one MyBurger location in the Minneapolis skyway and dreams of making their burger joint the Midwestern version of the Southwest’s legendary In-N-Out Burger. Abdo, who also owns the Nicollet Island Inn in Minneapolis and the Big Fat Bacon stand at the Minnesota State Fair, among other holdings, had worked with Fame in the past, and approached Robertson to help develop the brand. But when the bid came in too high, Abdo told her, “This is great, you’re hired. But you have to take stock.”

Robertson pitched the idea to the higher-ups at TBWA; within eight weeks, TBWA signed off on an all-stock deal to be the lead designer and brand developer for MyBurger. Fame has a vesting schedule and a schedule of return based on how many restaurants are open. Abdo plans to open 20 stores in the Midwest in the next five years.

Fame received creative license for the brand, while the Abdos focused on the food. “They’re very good partners in that they have a point of view, but they understand what we bring to them in terms of expertise,” Robertson says. MyBurger “can make a really great burger and really great sides, but that’s not going to be enough to create a zealot-like cult following. The place itself has to have a feeling and it has to have an experience that is not replicable otherwise.”

To achieve this individuality, each MyBurger location has a unique store design with visual references to the neighborhood in which it’s located. Sailboat and anchor illustrations dot the walls of the Lake Calhoun outpost. The Stadium Village location, opening by the end of the year, will have illustrations of bookshelves with beer bottles for bookends.

“[Fame took] their very young and talented people, who generally could not be the lead design of a brand for one of their Target or Best Buy customers, and put them in charge of My- Burger,” Abdo says. “So what they did was they took this unbridled, unrefined, raw, creative, youthful energy and they let it loose in this MyBurger corral.”

Fame is not the only stockholder in MyBurger, but it is the first. After inking that deal, Abdo went to his lawyers, architects, insurance company, and equipment provider, and requested that they, too, buy in.

The partnership is nontraditional, to be sure, but that’s why it should come as no surprise that Fame agreed to it. “If the status quo isn’t going to work,” Robertson says, “we find a way to make it work.”