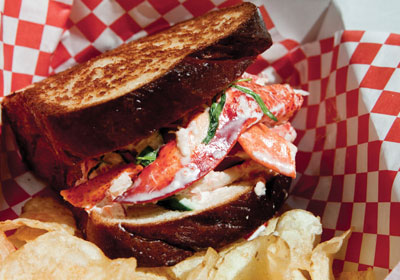 You shouldn’t mess with a New Englander’s lobster roll, a summer classic in no need of innovation. It’s just freshly cooked lobster, a little Old Bay seasoning, a very little celery for crunch, and, depending on your school of thought, just enough melted butter or mayonnaise to hold it together. And always—always—it’s served in a hot dog bun sliced through the top.

But this isn’t New England, and nobody’s complaining about the missing buns as they wait in lines a dozen people deep outside the Smack Shack. Year two of Josh Thoma’s food-truck experiment, bringing Eastern seaside road food to the office workers of Minneapolis, is a tasty success. In April, Bon Appetit called his lobster roll one of the six best in America— largely because he messed with the bun.

Thoma replaced it with a split-top slice of brioche, Texas-toast thick and baked by the Salty Tart Bakery. Richer and a tad sweeter than a hot dog bun, it does tradition one better.

It also makes room for, by my conservative estimate, a full cup of lobster filling: ruby-flecked claw meat, itsy-bitsy cubes of cucumber, and the lightest touch of lemon aioli. The cool filling on the hot, buttery toast is so irresistible that most customers dig in as soon as they get the takeout box in their hands. Thoma’s team also serves its lobster rolls (and fiery hot sausage sandwiches) at the 1029 Bar in Northeast Minneapolis.