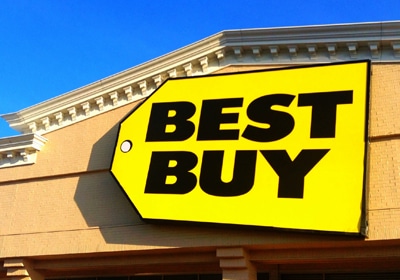 Best Buy made positive strides in online sales during its third quarter, but showed signs of struggle to overcome its strong electronics sales from 2014.
November 29, 2015

Despite pulling in a 21 percent growth in adjusted profit from August to October, Best Buy shares sunk in early morning trading after it joined the growing list of retailers giving a weary outlook for the crucial holiday season.

Through the three-month period ending October 31, the Richfield-based electronics retailer reported on Wednesday revenue of $8.8 billion, which was boosted by a double-digit percent increase in appliance sales, as well as computing, health-related wearables and large-screen TVs. But its sales shortfalls with tablets, mobile phones and digital imaging products couldn’t save it from a 2.4 percent drop in revenue from a year ago.

Best Buy’s online presence has continued on its upward trend, bringing in $709 million in revenue—an 18.3 percent increase from the same time last year.

In a company release, executives alluded to potential softness in electronics sales over the holiday season. Sharon McCollam, CFO of Best Buy, forecasted in the report that the retailer expects “a negative low-single digit revenue growth rate” for the next quarter. Moreover, the retailer is anticipating its international revenue to decline approximately 30 percent due to foreign currency fluctuations and a slumping presence in the Canadian market.

Best Buy shares fell in early morning trading, but have since recovered to $31.01 as of mid-afternoon Wednesday.