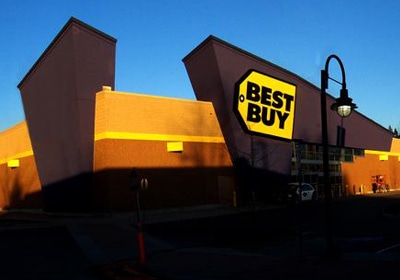 A softening demand for smartphones and tablets hampered Best Buy’s profit and revenue growth in the fourth quarter, the company said Thursday. But after lowering its guidance for the quarter last month, Best Buy still exceeded analysts’ expectations.

The Richfield-based electronics retailer’s revenue fell 4.1 percent during the three-month period ending January 30, from $14.1 billion a year ago to $13.6 billion most recently.

During the holiday season, smartwatches, wearable fitness trackers and home theater products were top performers at Best Buy stores. Hubert Joly, CEO of Best Buy, had said one of every two 4K televisions bought between November and December were purchased from Best Buy.

The company’s free shipping promotion seemed to resonate with shoppers as its online sales rose 13.7 percent during the quarter compared to last year. Still, the growth of Best Buy’s digital channel was far less than that of hometown rival Target (34 percent) or Amazon (20 percent).

Same-store sales slid 1.7 percent during the quarter after rising 2.8 percent the year prior.

A factor to Best Buy’s better-than-expected results was its damage control efforts. Joly said the retailer beat out expectations by sticking to fewer holiday discounts, improving recovery on returned and clearance product, and controlling company expenses.

As of midday Thursday, company stock rose nearly 2 percent to $32.06.

Best Buy’s chief financial officer Sharon McCollam said the company is hoping to offset its challenges in the mobile phone market with growth in appliances, connected home and home theater products. However, the company said it doesn’t expect sales growth on the immediate horizon.

“We are expecting revenue declines in the first half [of the year] followed by growth in the back half,” McCollam said in a statement. International business is expected to be particularly lackluster, with revenues down 15 to 20 percent due to a strong dollar and brand consolidation in Canada.

For the first quarter, the company is projecting revenue in the range of $8.25 billion and $8.35 billion with adjusted earnings per share between 31 cents and 35 cents.

After closing 30 stores last year (13 full-size locations, 17 smaller mobile stores), more closures are expected this year. McCollam said in a conference call with investors that more than 100 store's leases will expire in 2016. She added that each store's lease renewal would be evaluated as the company aims to cut at least $250 million in costs over the next two years.