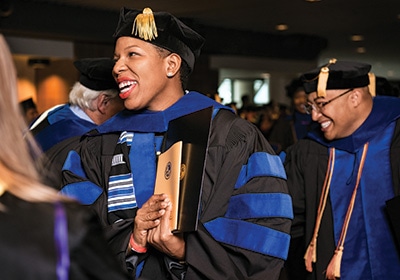 Capella leverages its strengths and updates its strategy to compete in the “new normal.”
By Burl Gilyard
July 01, 2016

It looked like a perfect gig when Kevin Gilligan took the helm as CEO of Minneapolis-based Capella Education Company in 2009. The online-college degree provider had racked up 15 years of steady growth, and its good fortune continued through 2010 as revenue grew another 27 percent to $426.1 million. Bolstered by national estimates and trends at the time, the company’s annual report for that year stated, “The U.S. market for postsecondary education is a large, growing market.”

The Great Recession hit home thereafter, however, and as the entire industry slid into decline, so did Capella’s revenue and enrollment numbers. Gilligan navigated the company through those tough times, and by 2014 and 2015, it was back to reporting growth—albeit at a much lower rate than in the past. He also faced a key question as to how the company should proceed.

“We could view it as ‘OK, this is just a cycle’ and just hunker down and wait for the cycle to recover,” he recalls, “or we could say ‘This is the new normal. The market demand will never be what it was, the competitive landscape has changed permanently, consumer preferences are changing, we need to create new models in terms of how we go to market and how we serve learners.’ We chose the latter path.”

This meant also sharpening Capella’s strategic focus on teaching students skills that are in demand. “It’s around creating the most direct path between learning and employment. Employers aren’t asking the question ‘Do you have a degree?’ They’re asking the question ‘Do you have the competency and skills to do this’?” Gilligan says. “What we mean by most direct path is no wasted time, money or effort.”

Capella is pursuing this “most direct path” approach through organic initiatives, such as FlexPath. Unveiled in 2013, the program allows working professionals to move more quickly towards a degree by demonstrating subject matter expertise, which is measured by assessments.

Capella has also embarked on an acquisition and investment strategy flanked by an extremely healthy balance sheet. For its most recent quarter ending March 31, the company reported $256 million in assets—$93 million of which is in cash and equivalents—versus only $58 million in liabilities, zero of which is debt. It also reported a net profit margin of 9 percent.

Since the beginning of the year, Capella has announced a series of deals to refocus and expand its business:

As it announced plans to divest Arden, Capella announced a partnership with online employment site CareerBuilder to design classes based on labor data reflecting employer needs. Billed as RightSkill, the program will offer non-degree classes in areas such as web development and information security that students can complete in less than 90 days.

In early May, Capella acquired Provo, Utah-based DevMountain, a non-degree coding school. Capella paid $15 million in cash, but could pay as much as an additional $5 million based on revenue and operating targets for the unit.

The company invested another $110,000 into Triple Tree, a partnership that “invests in innovative companies in the health care field,” bringing its total stake in the venture to $2.5 million.

The latest deals signal a further shift for a company that started by offering only masters and doctoral degrees and debuted its first non-degree programs in 2010 through Sophia Learning, which offers students a way to take general education classes online for credits that can be transferred to other colleges. Hackbright and DevMountain—billed as “boot camps” in the industry—offer in-person classes, something new to Capella.

It’s too early to point to any results from the latest ventures and there are no immediate plans for new locations. Hackbright and DevMountain will operate as subsidiaries and retain current management teams. And RightSkill remains in pilot phase. But so far, analysts and observers are encouraged by Capella’s latest moves.

“The backdrop for Capella is, business is tough,” says analyst Trace Urdan, who follows Capella as managing director and analyst for Credit Suisse in San Francisco.

But Urdan is upbeat about many of the company’s new initiatives: FlexPath (“That could become a really big and meaningful segment in the marketplace, and it’s not one that’s available from traditional providers”), RightSkill (“It’s a really exciting experiment that has the potential to be a big, market-changing move”) and the Hackbright deal (“Hackbright has something that’s different. It’s geared to women. It gives them an effective kind of marketing edge against the competition”).

When Capella University was getting its start in the mid-1990s, there were no smartphones, social media didn’t exist, and the notion that you could get a college degree online—without sitting in a classroom somewhere—still seemed like a crazy idea. Jeffrey Silber, an analyst with New York-based BMO Capital Markets, notes that traditional schools have come down from ivory towers and started to compete online.

“When this company started, very few traditional schools had online programs. Now it’s more the rule than the exception—almost all traditional universities have at least some online courses,” says Silber. “Arguably the brand names of these traditional schools are stronger than [Capella] in their local markets.”

Throughout the University of Minnesota system alone, students now have access to 42 online bachelors, masters, doctoral and certificate programs. Across the University system there were 1,597 online-only students in the fall of 2014, the most recent statistics available from the University.

At the same time, many for-profit colleges—both traditional and online—have come under increased scrutiny and criticism. The U.S. Department of Education levied a $30 million fine against Corinthian Colleges in 2015 for misrepresenting job placement rates. Corinthian shut down its remaining 28 campuses in the wake of the action.

Critics point to the high rates of for-profit students who wind up deep in debt. Detractors also argued that the profits of the schools were essentially underwritten by the taxpayers, given the colleges’ heavy dependence on federal student loans.

But the new business lines mean the company will need to get the word out to potential students.

“They think by investing elsewhere they’re going to get the growth that they’ve been missing for the past few years,” says Richard Garrett, chief research officer for Boston-based Eduventures, a higher education research firm. “They’re entering a new era of brand complexity that they haven’t had to contend with in the past.”

Garrett notes that Capella may find it more complicated to clearly define the company’s expanding menu of programs.

“It’s a double-edged sword,” says Garrett. “They may well benefit from having more diversity . . . the risk is that they have to distinguish between different versions of Capella, when they haven’t had to do that before.”

Urdan of Credit Suisse notes that the unwinding of the Alden University deal offers a cautionary signal about the latest round of acquisitions.

“That’s a strike against the boot camp acquisitions: they don’t have a tremendous track record with acquisitions,” says Urdan. “Maybe Capella is too small to be a platform from which to acquire other companies. International is still a really attractive market; They were not able to make it work. I think they just sort of stepped into a market they didn’t understand very well.”

Urdan notes that while many for-profit colleges have faced scrutiny and criticism in recent years, Capella maintains a solid industry reputation. “They are blemish-free and there are very few other for-profit schools that can make that claim . . . their record from a regulatory standpoint is spotless.”

Analyst Silber gives Gilligan credit for steering the company through a tough business climate. “They’ve been operating in a real rough environment. They’ve done a good job weathering the storm, but it’s not over.”

Taking the long view, Capella has come a long way. The company began in 1993 as the Graduate School of America and was renamed Capella in 1999. It went public in November 2006. The company’s first annual filing with the U.S. Securities and Exchange Commission showed historical financials back to 2002, when revenue was $49.6 million. For 2015, Capella posted net income of $40.2 million on $430.3 million in revenue. It has turned a profit in every since 2003.

“We generate a significant amount of cash, and we are very focused on making sure that we translate that into shareholder value,” says Gilligan.

But he knows that Capella needs to cut a new path.

“The road ahead is, we see a huge supply-demand imbalance in the marketplace. What I mean by that is there are employers that have jobs they can’t fill and there are people who are looking for better opportunities,” says Gilligan. “What the employers want are people with 21st century skills.”

Capella observers say that Gilligan has the right instincts for the current market.

“One of the things that I appreciate about Capella is they’re clear-eyed about the challenges that they’re facing now,” says Urdan. “[Gilligan] understands that the world has changed. I give him a huge amount of credit for really innovating in ways that I think are promising.”

Gilligan says that Capella has been posting enrollment gains, an encouraging signal for the future.

“The bad news is the market’s not growing. The good news is that the market is still very large. So there’s room for high-quality players to increase their share of the market,” says Gilligan. “And we believe by focusing on creating the most direct path between learning and employment, we can address unserved needs and create new sources of growth.”

Are there more deals on the horizon? “Right now between RightSkill and the two acquisitions we did,” says Gilligan, “we have a pretty full plate.”