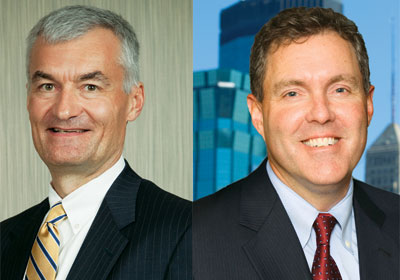 Behind the Scenes of the Faegre Merger

I was surprised to read news last year of plans to merge the Minneapolis law firm of Faegre & Benson with Indianapolis firm Baker & Daniels. The legal industry has been under pressure, but if anyone can withstand a downturn it was 125-year-old Faegre & Benson, with more than 450 lawyers and a golden brand.

In exploring the background of the merger with the firm’s managing partner, Andrew Humphrey, the takeaway is that the recession was nothing more than coincident. Big corporate clients do not simply hire lawyers anymore. They hire a firm. And to stay in the game a firm like Faegre needs to be everywhere a client does business, with deep skill in pretty much everything. “It’s not really about geography, it’s about expertise,” Humphrey says. “Clients need to have such confidence in the broad capabilities of the entire firm.”

While a little smaller, Baker & Daniels had a stature in its hometown similar to Faegre here. While Baker had reached the same set of conclusions as Faegre, both firms came to them through separate planning processes. For Baker, the path leads back to the formation of a strategy working group among its partners in 2007 (in other words, pre–Great Recession), according to Chief Executive Partner Tom Froehle. His group pursued two objectives: forming a strategy to enter the Chicago market, and developing a broader plan to expand the firm’s depth and reach.

There is a debate going on within the profession, and some of that discussion happened within Faegre, on whether slow growth trends in law are due to a simple business cycle, or if there are external trends that will shape the profession’s development after the economy recovers. Thumbing through data reported by the Citi Private Bank Law Group, which has some 600 U.S. and U.K. law firms as customers and routinely surveys about 180 large law firms, I found plenty for law partners to fret about. It’s just flat-out harder to make money running a big law firm.

The bank says that big firms “continue to shrink their way to profitability.” The latest data show some revenue growth in 2011 after two tough years, but “catch-up” spending on associate compensation and infrastructure has caused profit per equity partner to once again decline. Faegre, meanwhile, was shrinking along with the industry, dropping from more than 500 lawyers at the start of the recession in 2008 to about 450 on the date of the merger announcement with Baker. (Total headcount at the combined firm will be roughly 1,500—770 being lawyers.)

Some non-law trends are also covered in Citi’s surveys and other reporting on the legal industry. For example, even before the Great Recession, general counsels had begun to employ a few tricks learned from supply chain managers. Among them: dramatically shrink your vendor list to a handful of providers, and put your thumb on the survivors to lower their prices. For lawyers, this can mean fixed-fee billing and other alternative fee arrangements.

Faegre reached the conclusion that greater depth of expertise in more places was the best way to ensure it could grow with its clients. Some of the additional geographies Humphrey names are Chicago, Beijing, and Washington, D.C. Even Faegre’s middle-market clients work in China or aspire to, Humphrey says, and they need a much stronger presence. And the firm’s medical device clients, among others, demanded regulatory expertise in Washington. Baker is in Beijing and very big in Washington, while Faegre was not.

As Faegre was planning in 2009, Baker was ready to move. Froehle describes himself as a former skeptic of a merger strategy who had come to see the benefits of choosing that path. So in his shop, there was consensus in favor of action; and at the top of what Froehle describes as a “very short list” of merger candidates was Faegre. And so, late in 2009, Baker called.

Froehle adds that while strategic plans aligned, “what we needed was a lot more due diligence.” History, culture, governance models, practice areas, recruiting and compensation practices, and clients—all needed in-depth looks. The latter was a big one, as both firms have life science clients; in fact a client conflict stalled the process for some time.

In late summer 2011, the firms took the step of making the discussions known publicly, creating a two-month window prior to partner votes to open communication between the firms. Froehle and Humphrey jointly visited each of the two firms’ 13 offices. They were not pitching, but rather answering questions. “I’m an M&A lawyer,” Humphrey says, “and I know that the key to being successful is integration. We needed . . . true buy-in.” Both firms required 75 percent partner approval and exceeded that.

The combined firm will begin operations as Faegre Baker Daniels on January 1, with 13 offices in the U.S., U.K., and China. Humphrey is the firm’s managing partner, Froehle its chief operating partner. Joint headquarters are in Indy and Minneapolis.

“You know, we see our clients challenge themselves all the time,” Humphrey says, looking back at the process that led to the deal. “For some reason, there is reluctance at law firms to do that kind of thing.” And while there is big effort required near term to integrate the firms, Humphrey agrees that other strategic moves will be considered. “We know this. We can’t stand still.”