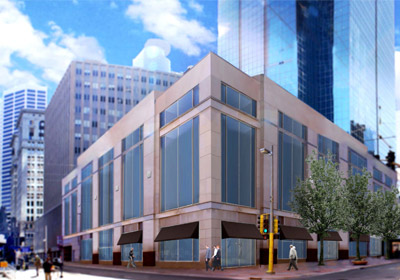 Renovation plans call for adding a “significant amount of new windows on the exterior,” converting the first lower level of the building to parking, and creating a new entrance on Nicollet Mall.
By Burl Gilyard
August 11, 2013

How do you convert a former upscale retail store into new office space? Add a lot of windows, apparently.

That’s part of the plan for the vacant former Neiman Marcus store at 505 Nicollet Mall in downtown Minneapolis. Houston-based utility CenterPoint Energy, Inc., confirmed last week that it plans to buy the 100,000-square-foot building to house its Minnesota headquarters.

Bloomington-based commercial property developer and investor United Properties, which acquired the empty store in May for $5.5 million, will complete the renovations to the property. The Neiman Marcus store, which first opened in 1991, closed in January.

According to United Properties, renovation plans call for adding a “significant amount of new windows on the exterior,” converting the first lower level of the building to parking, and creating a new entrance on Nicollet Mall.

“The renovations we will complete ensure that the property will be transformed into a unique place to work right on Nicollet Mall, taking full advantage of surrounding amenities including light rail, skyway connections, retail and food opportunities, and great visibility,” Bill Katter, executive vice president of United Properties, said in a statement.

The sale to CenterPoint is expected to close in late spring of 2014. CenterPoint will then start work on building out the interior space with an eye toward moving in during the first quarter of 2015. The price that CenterPoint will pay for the property has not been disclosed.

United Properties is part of the Bloomington-based Marquette Real Estate Group, which is owned by the Minneapolis-based Pohlad Family Companies.