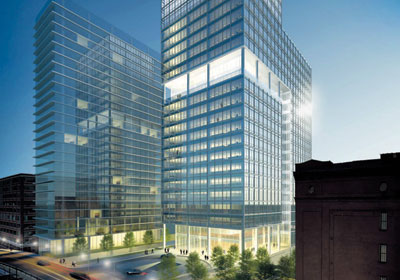 A decade ago, developers Bruce Lambrecht and Rich Pogin conceived of “Twinsville,” a complex of offices, apartments, and retail space that would rise on nearly seven acres of parking lots, extending from the left-field corner of a new ballpark north to Washington Avenue. Target Field was built, of course, and Twinsville fell under the control of Texas-based developer Hines. But development was a casualty of the recession.

Now the Twinsville site is back for another at-bat. In September Hines broke ground on the Dock Street Apartments, a 185-unit complex on the Washington Avenue side of the site. In early November, Hines announced plans for a 20-story office tower on the opposite end of the site directly across from the ballpark, tentatively called 350 North Fifth, but it is dependent on securing tenants.

So are we looking at Twinsville 2.0? Not exactly. For one thing, Hines is calling the site North Loop Green (for now). Second, there’s no grand plan, as there originally was with Twinsville. “We have to see where the market takes this,” says Bob Pfefferle, director of Hines’ Minneapolis office. The Dock Street project will house market-rate rental apartments, a hot market right now.

Hines is conceiving of the development in phases, Pfefferle says, with Dock Street representing the first. If some version of 350 North Fifth comes to pass, that would be another phase. That would leave two parcels in between those first two for development. The center of the site contains two massive I-94 freeway ramps, which will be challenging to develop around. In short, there are more innings left to play before we know the final score.