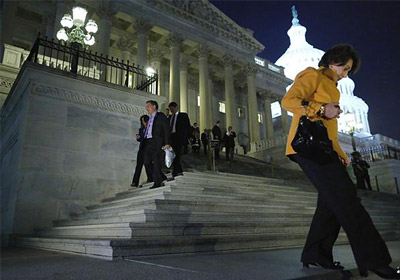 Bachmann Says This Is A ‘Very Sad Day,’ While Others Cheer Budget Deal

Bachmann was one of 144 Republicans to vote against the budget plan.
October 27, 2013

WASHINGTON — On Capitol Hill today there are essentially two distinct emotions, a split that is evident in the Minnesota delegation: relief from Democrats and moderate Republicans that the government shutdown is over, and often muted disappointment from conservatives who conceded a short-term victory for President Obama on health-care and the budget.

Saying the high-stakes budget fight was worth it, Representative Michele Bachmann was the only Minnesotan to vote no on the compromise plan.

The state’s two other House Republicans voted for the bill, but its Democrats were more excited to discuss legislation ending a 16-day government shutdown and the threat of a federal debt default.

Senator Al Franken, for one, said he was relieved the shutdown was over, and warned that the public’s visceral reaction to it should convince lawmakers to act more quickly on a budget bill in January, when funding expires again.

“We shouldn’t create a crisis in order to negotiate with each other,” he said. “That’s what we’re basically saying. We can’t lurch from crisis to crisis. We have to get back to a real process here.”

The compromise asks a joint House-Senate committee to come to some sort of budget accord before mid-December, a task Congress has failed for several years. It took eight months for the committee to even convene this year: Before Wednesday, Republicans have objected to forming the group after the Senate passed a non-binding budget resolution in March.

There are already signs the committee will struggle to come to an agreement: Republican leadership said Wednesday they’re not ready to raise spending levels over those established by sequestration cuts this spring, while Democrats said that’s one of their priorities.

“The sequester, we all believe is irrational. I think we need to replace that,” Franken said. “On talking about levels of spending and where we do our spending, there’s going to be some real negotiating and compromising.”

How liberals view the compromise

But in fact, liberal Democrats say they’ve already compromised in a way on sequestration: the bill passed Wednesday funds the government at post-sequestration levels, which are much lower than what they would prefer.

Representative Rick Nolan, for one, said he’s doesn’t completely like the compromise bill, even though he voted for it. He blamed Republican hardliners for shutting down the government when they achieved about as much in Wednesday’s bill as they would have back in September.

Representative Tim Walz slammed Republicans before Wednesday’s vote. He called the shutdown a “totally reckless, avoidable, manufactured crisis,” and cited a Standard and Poor’s analysis that found it costing the economy $24 billion.

“It’s a vote I’ve been asking for weeks,” he said. “It’s the vote we could have taken before this reckless shutdown began.”

Bachmann: GOP approach will be justified

Bachmann took a dimmer view of the compromise bill: She was one of 144 Republicans to vote against the plan, meaning the bill broke the tradition by which a House speaker  brings legislation to the floor only if a majority of the conference supports it.

Bachmann conceded, as Boehner did earlier in the day, that Republicans had lost this fiscal fight, and said Obama “got 100 percent of what he wanted” in the bill, which funds the government through December and raised the debt limit through February.

“I think [Obama] made, ultimately, in the long term, a very bad bargain,” she said. “To me, it’s a very sad day, because his agenda is going to go forward and he gets an immediate victory lap.”

GOP Reps. John Kline and Erik Paulsen voted for the bill. In a statement, Kline called the bill “imperfect,” but said “Congress and the White House must put country first.” Paulsen said, “We need to reopen the government and avoid a national default.” He told the Star Tribune that the shutdown had damaged the Republican brand.

But Bachmann agreed with some of the Senate’s most conservative members who said the theatrics of the last month have been worthwhile, and that in the long run, Republicans will be justified for fighting Obama as long as they did.

“This was a fight worth having,” she said. “Ultimately [this fight]’s about what type of government we want to have. The president is insisting that he be the only decision-maker when it comes to something as crucial as the budget. What we’re saying is that’s not the way our government works.”

Bachmann said the shutdown was about big-picture fiscal issues even though objections to Obamacare led to it in the first place—Republicans passed a handful of bills in September whittling away at the law, but Obama and Democrats said they wouldn’t negotiate over it. Conservative groups opposing Obamacare came out against the final deal, though at least one of one of them—the CEO of the conservative group Heritage Action—said the ultimate goal of repealing the law is probably off the table until Obama leaves office in 2017.

But conservatives on the hill weren’t admitting defeat Wednesday. Bachmann, who is retiring in 2014, said public opinion will turn on Obamacare, and soon.

“To force every single American to purchase a government-mandated product at a government-mandated price beyond people’s ability to afford it from a website that doesn’t work, this is not a scenario that people want,” she said. “The president can keep his fingers in his ears as long as he wants, but at a certain point, people are going to say, I don’t like this thing.”