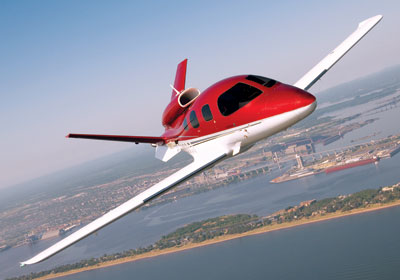 Aviation Takes Off In Duluth

Why did Cirrus Aircraft decide to move to Duluth in 1994 from southern Wisconsin to build its single-engine planes? Cofounder Dale Klapmeier points to two reasons. One is a two-mile runway at Duluth International Airport “with very little other activity.” The other is the city itself: It was not only a location where he could grow his business, “this was the place where I wanted to raise my kids.” And the people “have a work ethic that I don’t believe is matched anywhere.”

Cirrus’ landing represented the beginning of Duluth’s establishment as an aviation industry hub. Though its production plummeted during the recession and there were fears that the company would fold, Cirrus is once again in ascent, thanks in large part to its 2011 purchase by China Aviation Industry General Aircraft; a billboard announcing “Now Hiring: Cirrus Aircraft” has been installed next to Interstate 35 just south of downtown. In addition to its lightweight planes with comfortable sedan seating, Cirrus is now developing the market’s first single-engine jet.

The region’s status as an aviation hub was enhanced with the opening of AAR Corporation’s new commercial airplane maintenance facility in January. The Northern Aero Alliance, a regional aviation industry organization, now has 23 members. In addition to Cirrus and AAR, the group’s membership includes regional manufacturers, service providers, and other aviation industry stakeholders. Another member is Kestrel, a start-up founded by Alan Klapmeier, Dale’s brother and Cirrus’ co-founder. Kestrel is constructing a manufacturing facility across the St. Louis River in Superior, where it will be building planes that are larger that Cirrus’.

Yet another notable alliance member is the 148th Fighter Wing, Duluth’s Air National Guard base and the area’s ninth-largest employer.

“I see the aviation sector continuing to grow” in the Duluth area, Dale Klapmeier says. Cirrus will continue to develop new products, as will Kestrel. “Different airplanes will require different [subcomponents], which will also grow the supply base in the area.”