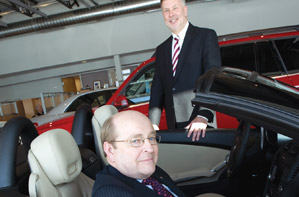 Sears Imported Autos had to choose between two German luxury brands. Here’s why it picked Mercedes-Benz.
By Chuck Benda
April 01, 2011

Selling two German luxury car marques almost ever since it opened in the mid-1960s, Minnetonka dealership Sears Imported Autos “has received a lot of offers to buy the business over the years,” says Don Davidson, one of Sears’ four owners. In 2004, Sears got an offer from a Colorado buyer. It seemed a good time to sell—the offer was strong, and both Mercedes-Benz and BMW had been putting pressure on Sears to separate the two makes.

The deal fell through, but that “turned out to be fortunate for all of us,” Davidson says. The owners realized that they didn’t want to sell the store. “Both brands were selling well, and we saw that they’d keep selling well,” General Manager Mike Roeder recalls.

For three years, at the behest of both marques, Sears Imported Autos kept the BMW and Mercedes areas separate within its complex. But booming demand meant Sears was bursting at the seams. In 2007, it made a choice: selling the BMW business to Minnetonka dealer TCA Imports in 2007.

“Mercedes-Benz had the biggest upside,” Roeder says. “They’ve improved the reliability of their models enormously during the past few years, cutting warranty claims in half. Plus, they made some dramatic improvements to their product offerings, adding a level of sportiness that we think will enable us to bring in a lot of new, younger buyers.”

The sale did cut the dealership’s revenues almost in half—sales in 2010 were around $60 million. But the deal meant more space to remodel and to further beef up its vaunted service capabilities. The remodeling was completed last year.

Among other features, the remodeled facility includes a customer waiting area with a fireplace and a closed circuit TV system, which allows customers to watch the repairs. Sears Imported Autos also made the repair area more efficient. For instance, in each technician’s work area, air and oil are pumped directly into the hoist, instead of via space-cluttering hoses connected to the walls.

Sears Imported Autos is planning a grand reopening in April. One reason to celebrate is the company’s sales for the month of January: “one of our best ever for new car sales,” Roeder says, with 27 new vehicles sold, compared to 12 in January 2010.