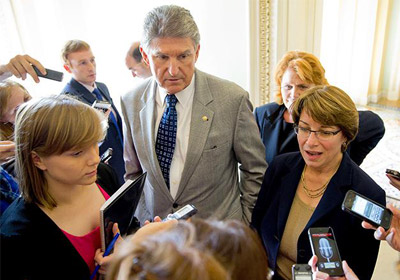 As for the length of the debt limit increase, Klobuchar said she hopes the deal is for “as long as possible.”
October 25, 2013

WASHINGTON — With just a few days to go before a major government finance deadline, senators said Monday that they’re getting closer to a deal to reopen the federal government and prevent a debt default—something lawmakers and economists have warned would be dire for the U.S. economy.

First, the potential deal: The plan would raise the limit on federal debt for five months and extend government spending through January in exchange for longer-term debt and deficit discussion this winter. Senator Amy Klobuchar, a member of a bipartisan 12-senator group looking at potential budget deals, told NPR Monday that the plan could be gaining traction ahead of Thursday’s deadlines.

“This is the most optimistic day we’ve had in a while, of course it’s all relative,” she said. “The good news today was Senator [Harry] Reid and Senator [Mitch] McConnell … have met numerous times today, taking some of the elements of our suggestions and I’m sure adding some of their own.”

As for the length of the debt limit increase, Klobuchar said she hopes the deal is for “as long as possible.”

“We just don’t want to have a country that lurches from one financial crisis to the next,” she said.

Economists have warned that a debt default, as is possible if Congress can’t pass a bill in the next couple days, would have dramatic effects on the United States and global economies, and that all Americans would eventually feel its effects. Their most basic warning: If the United States can’t borrow enough money and doesn't pay its bills, or if those payments go out late, investors will see the America as a riskier investment and demand higher interest rates to compensate. Those higher interest rates would hit both businesses and consumers, damaging the economy.

“This has never happened before,” federal budget expert Stan Collender said. “The expectation is that there will be a huge negative market response, and interest rates will start to rise, which will hurt the economy.”

In September, Klobuchar’s Joint Economic Committee released a report detailing what it said were the likely effects of a debt default. Higher interest rates could increase the cost of for both businesses (who might prop up payroll financing through borrowing, for example), and consumers, who could see credit card and home equity loan interest rates increase.

Business groups have sensed the danger a default poses and have actively pushed Congress to prevent a default, including a handful of Minnesota chambers of commerce, which signed a letter to lawmakers in September.

“With the U.S. economy continuing to underperform, the federal government needs to maintain its normal operations pending a successful outcome of broader budgetary reforms,” the letter said, appealing for Congress to prevent a government shutdown as well as a default. “We respectfully urge the Congress to raise the debt ceiling in a timely manner and remove any threat to the full faith and credit of the United States government.”

The government would also have to delay payments to beneficiaries of government programs like Social Security, the report said. This would “have a direct impact on millions of Americans and, in turn, would negatively affect the economy by pushing down consumer spending.”

Senator Amy Klobuchar was interviewed Tuesday morning on CBS This Morning about helping to craft the deal to end the government shutdown.

The federal government could begin paying its debts on a day-to-day basis, Collender, a financial affairs columnist and author and former congressional staffer, said. It brings in about $30 billion in tax revenue every day, but that’s not nearly enough to pay down the myriad of obligations the U.S. has taken out. The government could delay paying individual bills until it has enough cash to do so, Collender said, but the bills will eventually add up—remember, the U.S. is running a $600 billion deficit this fiscal year, so it will eventually need to borrow cash to pay everything off.

Mark Zandi, the chief economist of Moody’s Analytics, told the Joint Economic Committee on Friday the government could be forced to cut up to $130 billion in spending as early as November. It would be a “cataclysmic economic scenario,” he said: GDP could fall by 5 percent, the economy would shed 10 million jobs, sending unemployment to 12 percent, and stock prices could be cut in half.

“If we breach the debt limit and the Treasury misses a payment to somebody . . .  that would be a prescription for a very dark, deep recession,” Zandi said. “Interest rates will spike, stock prices will fall, confidence, business confidence, which is already weakening, will evaporate, and we’ll be in a deep recession, and there is no policy response to that. . . . What we’re doing now is doing damage, and this is going to mount day-by-day.”

That’s why there’s so much riding on any potential debt limit deal that Congress could pass before Thursday.

Politico has details on Monday’s negotiations: Under the emerging Senate plan, the government re-opens and if funded through Jan. 15, the same day a second round of automatic, across-the-board spending cuts kick in, a deadline meant to force Democrats and Republicans to come together on some type of broader government spending scheme. The debt limit is increased through Feb. 7.

The proposal doesn’t do much to President Obama’s health care law, which a failed Republican-lead effort to defund led to the government shutdown in the first place. The plan may ask the government income limits on those receiving health care subsidies, and Politico reports Democrats want to repeal one tax—the so-called “belly button tax”—in exchange.

The question now is how the GOP will respond: the House conference will look at the bill Tuesday morning, but early reactions Monday were cool.