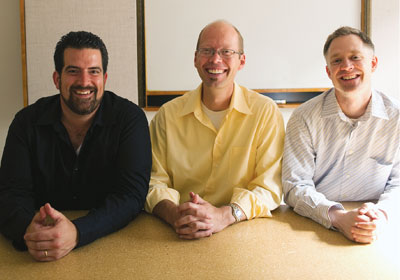 Around the Digital Campfire

If at first you don’t succeed, try again—and again, and yet again.

When Monkey Island released BuyTheChange to the world in November 2008, the principals were confident they’d soon be stealing market share away from Craigslist. But “we felt like we just had to keep convincing people how good it was,” says Zack Steven, one of Monkey Island’s cofounders. “We just didn’t get the kind of traction on it that we anticipated.” Instead of success, they experienced a learning opportunity.

Then the trio hit upon a new idea: an app that allows Twitter users to find each other by zip code. It turned around the application’s code in a little over three weeks. The launch of LocalTweeps was everything that BuyTheChange hadn’t been: fast, lean, simple.

“It just went through the roof,” Steven says. LocalTweeps has been used by more than 60,000 people spanning more than 13,000 zip codes. “We’re still getting new registrations pretty much every day,” Steven adds.

Monkey Island is named after a park where cofounders Steven, Josh Becerra, and Colin Hirdman played as kids in the St. Anthony Park neighborhood in St. Paul. It began as a playground for their ideas about digital technology’s potential to help reinforce “place-based” communities—that is, as opposed to solely digital ones.

The company now seeks to become something of a community itself, a place where aspiring entrepreneurs can come to learn from the successes and failures of others. The concept plays out every day at the 3rd Place, a “coworking” center that Monkey Island opened in January in the neighborhood where its cofounders grew up.

At the 3rd Place, freelancers and other untethered professionals can come to work for a modest monthly fee. (The 3rd Place also serves as Monkey Island’s headquarters.) On the weekends, tech entrepreneurs are invited in for Startup Saturdays, an informal, daylong session to collaborate and bounce ideas off each other. The goal is eventually to develop a more formal program that would help aspiring entrepreneurs prepare their ideas for market, then connect those businesses with investors.

Meanwhile, Monkey Island continues to develop its own portfolio. It was preparing to unveil its latest product in July, a service called SMBTweet that helps small and midsize businesses grow their Twitter audience. The Web app uses location and keyword searches to find prospective customers. When it finds a match, it follows the tweeter with the hopes he or she will follow back.

To develop this application, Monkey Island reached out to prospective customers and tried to prove the concept as early as possible. They were able to test the process manually before building a digital tool that automates it. As a result, Monkey Island found that it had paying customers even before the product launched.

Monkey Island is also preparing to retool some of the ideas and elements of BuyTheChange into a new platform to be released later this year.

With every project, Steven believes that he and his colleagues are getting better at their model of lean, bootstrapped launches. BuyTheChange deserves some credit for that.

“It’s not a failure if you learn from it,” Steven says. “I don’t think there’s a real great way for people to learn those things. You’ve got to try to sell it as early as you possibly can . . . . You’re not going to get it right the first time, so just get it out there.”