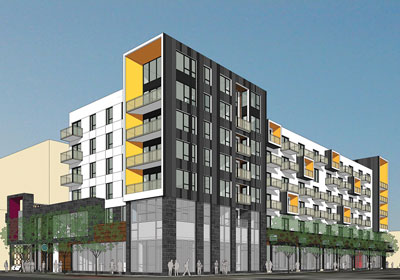 Are Minnesotans Ready To Live Small?

Some developers are pushing for micro-unit apartments that push against minimum square-footage requirements.
August 10, 2015

Minneapolis is not New York. But as the apartment boom continues, some developers are testing the market for smaller units in crowded areas such as Uptown and downtown Minneapolis. The smaller—and cheaper—approach emerging in other metros has been dubbed “micro-units.”

Minneapolis-based CPM Development plans to redevelop the site of the Cheapo music store in Uptown into a mixed-use project with 139 apartments. CPM’s plans call for 50 of those units to be studios ranging from 450 to 480 square feet. Dan Oberpriller, president of CPM Development, says that the pricey Uptown market is awash in one-bedroom units.

“The people who live in Uptown are a little bit priced out,” says Oberpriller. But he says, “this is a little bigger than a micro-unit. I don’t want to be the leader in the micro-unit territory.”

“We are hearing more and more that people want to build what they’re referring to as ‘micro-units,’ ” says Jason Wittenberg, manager of land use, design and preservation for the city’s community planning and economic development department. And, he says, “there does not seem to be a lot of market demand for going less than 350 [square feet].”

Other developers are eyeing cozier projects.

Curt Gunsbury and partners scrapped a North Loop condo plan, switching gears to propose 71 micro-units at the site. Plans submitted to the city in May show many studios ranging from 379 to 441 square feet.

Minneapolis-based Greco and Minnetonka-based Opus Group are pitching a 143-unit project on the site of the ABC industrial warehouse, also in the North Loop. Documents submitted to the city note, “This development will meet a need in the North Loop by offering a greater percentage of studios and alcoves than is typical.”

A recent report from the Washington, D.C.-based Urban Land Institute found that there is no standard definition for what constitutes a micro-unit, but notes that San Francisco and the District of Columbia both allow units as small as 220 square feet.

“Micro-units are a micro-trend,” says Michelle Winters, ULI’s senior visiting fellow for housing. She says that smaller apartments are appealing to renters who want to live in a specific neighborhood, but might not otherwise be able to afford the steep rents.