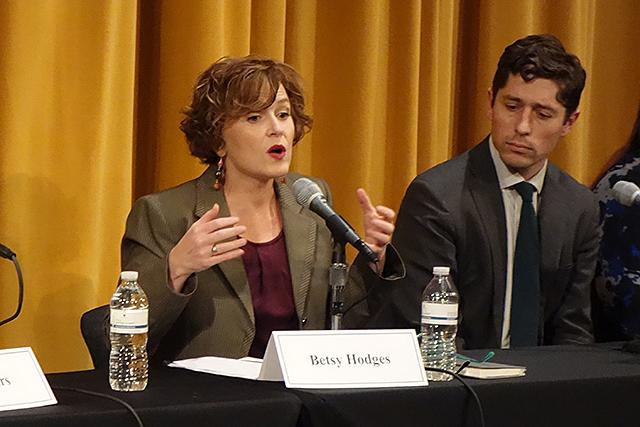 A recent forum offered candidates a chance to explain whether they will accept — let alone seek — support from the local business community.
June 08, 2017

That the question had to be asked says something about the tone of the Minneapolis mayor’s race so far.

“Are you seeking the support of business owners and leaders?” Star-Tribune business columnist Lee Schafer asked at a gathering of six mayoral hopefuls at a Tuesday candidate forum addressing business and economic issues held at the University of Minnesota's Humphrey School of Public Affairs.

Since the campaign is still in the DFL-endorsement-seeking phase, the campaign rhetoric up to now hasn’t been exactly business friendly. So it was apt to wonder whether the candidates would accept — let alone seek  — business support, especially since the Minneapolis Chamber of Commerce was the event sponsor.

The answers from the seven candidates invited to the Humphrey School auditorium ranged from “yes,” to “yes, but” with a single “no.”

One of those “yes” responses came from incumbent Mayor Betsy Hodges. “The success and thriving of business in Minneapolis is one of the reasons that we’re doing well, and it’s one of the keys to the future as long as we make sure we’re doing it the right way,” she said.

Council Member Jacob Frey also said he is seeking and receiving business support “because what we are doing in the 3rd Ward over the last four years has been working.” He said that his ward has had 40 percent of the new construction in the city and “near record numbers” of business starts.

Former Hennepin Theatre Trust President Tom Hoch, meanwhile, used the question to voice his central campaign theme — that the city under Hodges does not have a plan to differentiate itself and build the economy as do cities like Seattle, Denver and Austin.

Aswar Rahman, who said he comes from an immigrant family filled with small-business people, said that he was seeking business support but that the concerns of business people aren’t much different from the concerns of everyone. “There’s a tendency to make a distinction,” he said. “Business owners live in the city too, most of the time. They care about the issues of police, and they care about education.”

State Rep. Raymond Dehn also said he is seeking business support, “but we also need to consider that over the past five years, we have seen a lot of prosperity that’s happened in certain parts of our city and other parts that haven’t benefited.”

Only longtime activist Al Flowers said he had no interest in support from the business community. “Business is being taken care of by City Hall and the City Council,” said Flowers. “I’m going after the people who are stressed and undergoing equity concerns.”

How business-friendly is Minneapolis?
The other topics raised by the event's moderators, Schafer and University of Minnesota professor Larry Jacobs, centered on whether the city was business friendly, including questions about whether the candidates — especially Hodges and Frey — had thought about business impacts of ordinances such as mandatory sick leave, the city-only minimum wage and recent hikes in the property tax.

The challengers often took aim at Hodges, and to a lesser degree Frey. The two are not only the two city elected officials in the race, but are seen as being two of the strongest candidates in the field.

Levy-Pounds agreed that the city does make starting and running a business challenging. “I believe what’s happening to business owners and business leaders is a microcosm of the challenges that many of us face when it comes to city government being responsive,” she said.

Rahman agreed with a question that business people feel their concerns are met with “deaf ears.” “In Minneapolis, business is seen by the government as something to be done to rather than work with,” he said. “It is something we throw laws at and see what sticks.”
Hodges defended her record on business, saying she listened to businesses’ concerns during her first year and then implemented her Business Made Simple program, which is attempting to get rid of outdated regulations and adjust how city officials deal with businesses. “You don’t need a jukebox license in Minneapolis anymore,” Hodges said. “You’re welcome.”

But she sparred a bit not only with the questioners but with Frey on the issue of worker benefits. Rather than describe her initial advocacy for a fair-scheduling ordinance as an example of turning a deaf ear to business, she thinks her decision to back away after hearing concerns should be viewed as an example of listening.
“That’s the definition of being heard,” she said.

City-only mininum wage: 'The right thing' or 'a trap'?
Frey, however, was critical of Hodges for violating what he considered a pledge by city officials to withhold taking a position on the details of the minimum wage until a series of listening sessions was complete. He said that he’d been in favor of the city going alone on the minimum wage for nearly three years, but that effort was initially thwarted by Hodges, who preferred a regional or state wage plan.

“For about a year and a half, up until Mayor Hodges flipped her position to suddenly be for a minimum wage in an election year, it did not look like we would be able to get anything done,” Frey said.

Hodges also announced in December that she could not support a local minimum wage that let restaurants include tips to cover part of that minimum (known as a tip credit or tip penalty, depending on whether the definer is for it or against it).

At the forum, Hodges noted that Frey had been supportive of a tip credit and now opposed it, presumably when it became a litmus test for economic justice advocates and the more progressive wing of the city DFL.

Frey, in turn, said he talked about the tip credit and “about 50 other things” as he was looking at ways to have a wage ordinance that would work.

Hodges, Frey, Levy-Pounds and Dehn all pushed back on suggestions that the minimum wage would harm businesses; that it would lead to an exodus of businesses to the suburbs or cause job losses.

Dehn said that after he voted to raise the state minimum wage, there hasn’t been negative economic consequences. Levy-Pounds said she agreed with Hodges — something she noted wasn’t a frequent event — that it would have been better to act with other governments in the Twin Cities region.

“But the reality is, we can’t wait for St. Paul, we can’t wait for other cities to do the right thing,” Levy-Pounds said. “At some point as a city we have to become a leader.”
Frey said he did not think there would be any business losses because the City Council will likely adopt multiyear phase-ins.

Hodges predicted what she called a “transition trough” as businesses and workers adjust to the increases but that the city could manage it. “But I also think the question is, ‘Who’s paying now for the lack of a minimum wage?” she said. “We all are, because of people working two jobs or working full time and still living in poverty,” which contributes to more people needing government assistance and government help.

Hoch said he wasn’t sure of the impacts — studies of other cities’ wage increases are inconclusive since the ordinances haven’t been in effect long enough. But he did say they next mayor needs to be monitoring the implementation and be prepared to make adjustment if impacts are overly negative.

Only Rahman and Flowers said the city-only minimum wage would hurt business, and hurt people of color disproportionately and the poor disproptionately. Flowers dubbed the minimum wage “the biggest ruse” of the election. “Walmart, Target, these big organizations, they can handle $15 an hour,” he said. “You’ll kill all small business, and everybody up here knows that.”

Flowers said the city should spend its time on issues that will actually help poor people, such as affordable housing.

Rahman was also critical of a city-only wage. “Al called it a ‘ruse,’ he said. “It’s also a trap,” because it will make it more difficult for people — especially people of color — to start businesses. The city is 40 percent people of color but only 10 percent of its businesses are owned by minorities, he asserted. “It’s a trap. It’s a way to make sure we cement that gap. And in that gap is where poverty thrives; it’s where crime thrives; it’s where unaffordable housing thrives.”

“That is the way to make sure Minneapolis stays an impoverished city for 40 percent of us,” Rahman said.

Under fire for property taxes
Hodges also took shots for the recent increases in city property taxes. Levy-Pounds and Rahman said that property taxes are a factor in rent hikes that are displacing some residents.

Dehn, however, said much of recent increase in tax bills are due to the recovery in property values after the Great Recession. “We have lots of wealth and sometimes it’s OK to raise taxes on some folks who can afford it,” Dehn said. And it is a hot market that is as much to blame for rent hikes as property taxes, he said, suggesting that the city could investigate ways to abate taxes on some apartments in return for owners agreeing to keep rents lower.

Frey said that much of the construction is in his Ward 3, and that the development builds the property tax base without raising taxes on others. But Hodges noted that the value of new construction doesn’t automatically turn into tax revenue. To do that, the city has to increase its levy amount, Hodges said. And she defended her backing of a long-term plan to repair and maintain parks and streets, much of which will be funded by property taxes.

While the forum was intended to focus on business and economic issues, Flowers at one point objected to even using that premise for an event. “The biggest issue in this city is about people dying,” he said in reference to gun violence, especially among young people.

But the city won’t focus on that, he said, because it is responding to business concerns about violence downtown, especially with the Super Bowl coming in February. “They spent time on the downtown plan, to prevent people from coming downtown, but they did nothing about the violence on the north side,” Flowers said.
“But it all go together. If you don’t fix that, then you’re going to have problems downtown forever.”