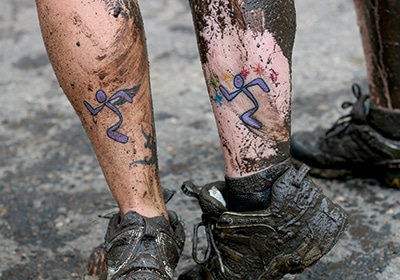 Anytime Is (Literally) Branding Its Workforce

Anytime Fitness wants its logo permanently on your body.
August 08, 2016

With treadmill desks, a body-waxing center and mile-long jogging path—plus a zipline and multi-floor rock-climbing wall to come—Anytime Fitness’ Woodbury headquarters is a perplexing mix of office space and fitness center. According to CEO Chuck Runyon, the 81,000-square-foot campus falls within “the intersection of People, Purpose, Profits and Play”—some of the company’s watchwords. Yet the amenity that more than 200 Woodbury staff appreciate the most has virtually nothing to do with fitness: It’s a tattoo parlor.

Runyon says the need for a dedicated space to permanently ink Anytime Fitness’ staff and extended corporate family originated from an event at the company’s first annual conference for employees, franchise owners and vendors in 2005. After listening to several success stories from members, Mike Gelfgot, a franchisee from Indiana, became so fired up about the brand that he told Runyon he was going to have the company’s “running man” symbol tattooed on his shoulder. Gelscott’s dedication became a trend among Anytime Fitness’ other franchise owners, employees, members and vendors.

“Eventually we lost count,” Runyon says, although he estimates that more than 3,000 people globally have received the running man tattoo. Over 50 headquarters staff have been inked, and tattoo artists have become a feature of every corporate/franchisee function from training sessions to vendor events. “They became so busy that we had to create a reservation system,” Runyon adds, “because we didn’t want people to miss the seminars.”

Runyon is experimenting with ways to further overlap Anytime’s brand with tattoo culture. Which means branding bodies with the company logo. “The rules are you can personalize the running man any way you want, but send us a photo and your story behind why you did it and we’ll reimburse [you],” he says.

Starting this fall, the company will host “Bleed Purpose Days” at its headquarters. Anytime Fitness will hire tattoo artists to provide members with free tattoos, even ones that don’t include the running man. “To us,” Runyon says, “it’s more about celebrating your passion, and we want to help bring that to the surface, literally and figuratively.”