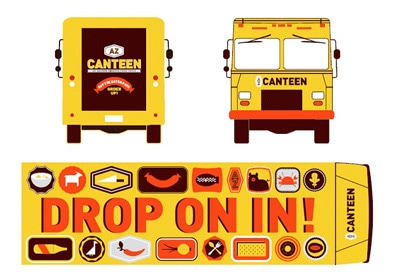 Andrew Zimmern, host of the Travel Channel’s Bizarre Foods and a resident of the Twin Cities, is poised to make his contribution to the growing local food-truck trend.

Zimmern plans to “expand the protein choices of Americans with the overarching goal of restoring health and wellness to our food system one plate at a time,” March said.

Although Zimmern is known to many for his willingness to consume extremely unusual foods, it appears his food truck fare won’t stray too far from the beaten path. Zimmern reportedly teamed up with acclaimed New York butcher Pat LaFrieda to create a goat burger blend and a goat sausage. The menu will also feature crispy pork belly, veal tongue sliders, and ice cream sandwiches made with ice cream from St. Paul-based Izzy’s.

Following its State Fair debut, AZ Canteen will make appearances at some local events, “but don’t be surprised” if Zimmern eventually adds more trucks in other cities and even other countries, March said.

AZ Canteen appears to have launched a Twitter page, which has a single tweet indicating that the food truck is looking to hire Twin Cities employees.

AZ Canteen joins a growing list of local food trucks, some of which have also recently begun setting up permanent restaurants.