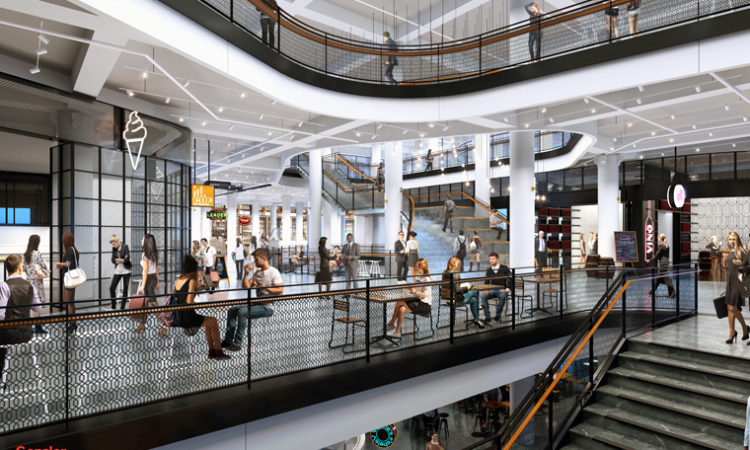 The celebrity chef hopes the food hall—with its food business incubator and “curated entertainment and activations”—will be a unique draw on the Nicollet Mall.
By Sam Schaust
December 12, 2017

The first official tenant has been locked in for The Dayton’s Project, a massive redevelopment effort underway at the old Macy’s building on the Nicollet Mall in downtown Minneapolis.

Twin Cities resident and celebrity chef Andrew Zimmern will be teaming up with Robert Montwaid, creator and co-founder of Gansevoort Market in New York City, to develop a 40,000-square-foot, multi-faceted food market split between the first and lower floors of the building.

Modeled after European food halls and markets, the duo detailed in a statement plans to showcase all things food: featuring traditional food vendors, concierge food services, a food business incubator, and “curated entertainment and activations all aimed at making Dayton’s Food Hall and Market the gold standard for experiential dining” in the city.

Although they did not list specific purveyors, Zimmern and Montwaid plan to have fresh meats, seafood, butchers, bakers and artisanal producers of cheeses and other products present in the space.

In an interview with TCB’s sister publication Mpls St. Paul magazine, Zimmern said the idea of bringing a destination food hall to the Twin Cities is something he’s long wanted to do.

“The great food halls around the world and domestically, that have become destination, must-visit venues have been in downtown settings. Reading Market in Philly, Grand Central in LA, West Side in Cleveland—all have 100 year histories in urban areas and have become synonymous with their cities,” he said. “It’s an understatement to say that every single Minnesotan has a relationship with that building. To have it back and be part of the team that develops it is amazing. I’m honored.”

Leasing for the market will be done by Mid-America Real Estate. “Pulling together a deal as large and iconic as this one demonstrates that the developers of this project can not only envision creative concepts, but also bring them to completion,” said Tricia Pitchford, senior vice president of leasing for Mid-America Real Estate’s Minnesota office.

New York-based real estate developer 601W Companies acquired the old Macy’s space—technically made up of three buildings—earlier this year. It said previously that it would aim to bring a mix of restaurant and retail space to the lower floors of the 12-story structure. With a total of 1.3 million square feet to fill, the addition of a Zimmern-backed food hall could be the initial push it needs to draw in retailer commitments, as well as attract business to the revamped office space (and health club) that are set to fill the floors above.