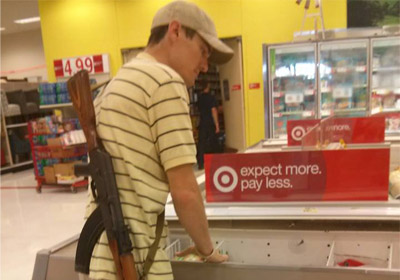 Amid Debate, Target Takes Stand Against Guns In Stores

In response to recent “demonstrations” by gun rights enthusiasts in Target stores, the Minneapolis-based retailer has changed its policy on firearms and is now asking that customers no longer bring them into stores.

Earlier this summer, a group called Open Carry Texas took pictures of some of its members walking through a Target in Texas with rifles slung over their backs. The pictures garnered a heated response from a group called Moms Demands Action for Gun Sense in America, which called on Target to clarify its policy on firearms. Later, the Moms Demands Action group said similar gun demonstrations took place at Target stores in around six other states.

In “open carry” states like Texas, citizens are allowed to carry firearms in public as long as they aren’t concealed from view. Minnesota allows citizens to open carry if they have a license. In “open carry” states, it’s left up to business owners to request that customers keep firearms off their premises, if they chose to do so.

At the time, a Target spokeswoman Molly Snyder said only that Target was committed to following all state and federal laws. About a month later, the retailer released a note Wednesday from interim Mulligan addressing the issue.

“As you’ve likely seen in the media, there has been a debate about whether guests in communities that permit ‘open carry’ should be allowed to bring firearms into Target stores,” Mulligan wrote in a note to Target employees. “Our approach has always been to follow local laws, and of course, we will continue to do so. But starting today we will also respectfully request that guests not bring firearms to Target—even in communities where it is permitted by law.”

According to Snyder, the announcement is strictly a request and not a prohibition. She said Target doesn’t have plans for “additional proactive communications” for guests, such as signage outside of stores.

Similar controversies have taken place at other businesses, with similar responses. According to the Pioneer Press, restaurant chains Chili’s, Starbucks, Chipotle, and Jack in the Box have all enacted new firearm-restrictive policies after gun rights groups displayed their rifles at their stores.

“This is a complicated issue,” Mulligan said in the statement, “but it boils down to a simple belief: Bringing firearms to Target creates an environment that is at odds with the family-friendly shopping and work experience we strive to create.”