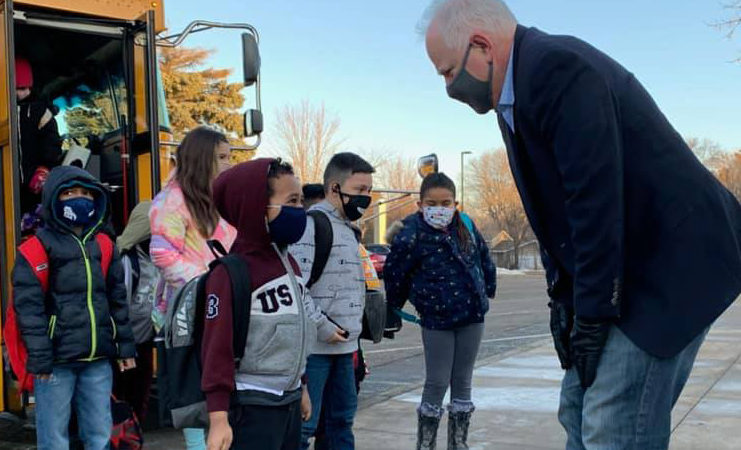 Every resident aged 16 or older will be eligible for a shot as soon as Tuesday.
By Dan Niepow
March 25, 2021

Most adult Minnesotans may end up getting their Covid-19 vaccines earlier than expected.

On Thursday afternoon, Gov. Tim Walz announced that vaccine eligibility will expand to all state residents aged 16 or older starting Tuesday, March 30. Last month, the governor said that most adults could expect to get a vaccine sometime this summer. The latest development, slated to be officially announced on Friday, will accelerate the plan.

In a statement on Wednesday, Walz’s spokesperson Teddy Tschann noted that “the federal government has promised an increased supply of vaccine by April.”

Though eligibility will increase substantially, the Walz administration is still directing providers to “prioritize vaccine appointments for older Minnesotans, those with underlying health conditions, and those in frontline jobs.”

“Providers will then have the flexibility to provide available appointments to other eligible Minnesotans,” Tschann said.

Vaccine eligibility had been restricted to those 65 or older, and to people with certain underlying conditions.

In a Friday press conference, Minnesota Department of Health commissioner Jan Malcolm said the state had been receiving an average of 330,000 doses of vaccine a week so far. Next week, state health officials expect that number to bump to as much as 424,000 doses, based on estimates from the federal government.

Of course, eligibility and availability are two different things. Even with the uptick in vaccines, it’s unlikely that the state will have enough supply for everyone who wants a shot next week. Walz likened the eligibility expansion to adding another “lane” on a highway; the fastest lane will still be dedicated to vulnerable populations, such as those 65 and older, or people with chronic conditions. “If no one is in that lane, our providers will move to the next lane,” the governor said. “We want to keep the queue loaded.”

The governor noted that Minnesota is currently leading the nation in terms of number of vaccines administered. “We’re here to end this pandemic,” Walz said. “We are on the doorstep of doing this.” Walz’s ultimate goal is for Minnesota to be the first state in the country to vaccinate 80 percent of its population.

The state is still targeting other key population segments, including food plant workers. In Worthington, health officials have established a community vaccination site to get shots to workers at the JBS USA pork plant, which previously had one of the worst Covid-19 outbreaks in the state.

“We’re continuing to work with our business sector to make it as easy as possible” for workers to get vaccines, Walz said.

President Joe Biden previously set a goal of offering vaccines to all adults by May 1. Minnesota is now among 34 other states that appear likely to surpass that goal, The New York Times reported.

Meanwhile, the state’s health systems say they’ll continue to work through a backlog of more vulnerable patients before expanding eligibility. In a statement, Allina Health said it will continue to send out invitations for appointments to “high-risk groups based on state guidance” before opening up vaccines to all residents 16 or older.

“To ensure fairness, we created a list of patients with certain medical conditions, as previously defined by the state of Minnesota,” the health system said. “Then, we used a computer to randomly select the order in which patients are contacted. We expect that it will take us a few more weeks to complete invitations to this group.”

For its part, HealthPartners said it “will be inviting randomized subsets of patients as we move through age bands within the broader eligibility criteria,” the health system said in a statement.