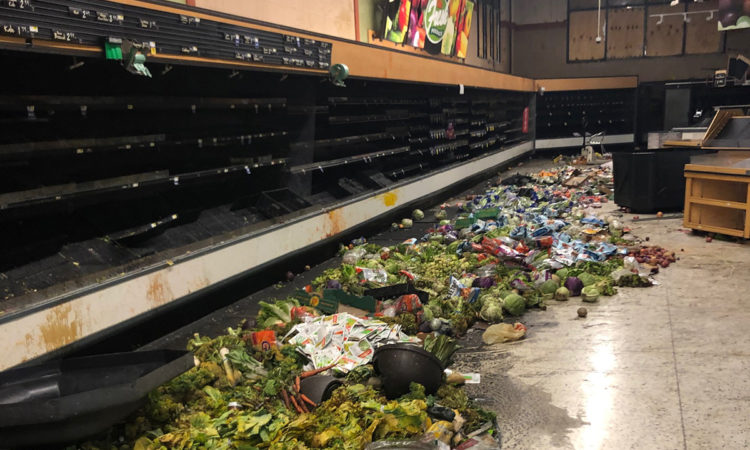 Workers had to quickly clean out the Cub Foods in Lake Street due to spoiled inventory inside. Provided photo

This summer, Clean Response Inc. was called in to help clean up more than 140 riot-damaged businesses.
By Dan Niepow
October 22, 2020

As CEO and owner of St. Paul-based Clean Response Inc., he’s overseen countless cleanup jobs over the years, tackling everything from water damage repairs and mold removal to death scene cleanups. But he’d never been called on to handle damages after a riot.

He quickly got to work, dispatching crews to work on dozens of businesses the morning after. Larson estimates that he’s helped clean up more than 140 riot-damaged businesses in the Twin Cities. Many of those were along Lake Street in Minneapolis, but there were other jobs in St. Paul and north Minneapolis.

“The first night of rioting, when you could see the burning of the buildings going on by the police precinct, we were getting calls from property owners in that area,” Larson says.

He likely could have taken on hundreds of more jobs, but he didn’t have the resources to tackle all of them. “Most of the work we were doing was with customers we already had,” he notes. “We had to decline a lot of cold calls.”

Founded in 1998, Clean Response primarily handles emergency cleanups, but it’s also done a lot of boarding up during the Twin Cities riots. Actual rebuilding efforts are usually contracted out to larger companies.

Clean Response is a national operation, handling jobs in the deep south and along the coasts. Larson has taken on lots of difficult jobs since he became CEO of Clean Response in 2003. Back in 2005, his company was called on to help clean up after Hurricane Katrina ravaged the Mississippi Delta. And three years later, Clean Response handled cleanup efforts after massive Mississippi River flooding in Iowa.

Regardless of the type of job, Larson approaches each with deep respect for the communities involved. The impacts of the devastation cut deep, whether the damage was caused by a natural disaster or a riot.

“You get out and you see this devastation firsthand. Just sitting in your house reading a story or seeing it on TV doesn’t really relay the true effects of what’s happened,” Larson says.

In the case of the Twin Cities riots, the work could at times feel fruitless. Clean Response workers would come in to start a job and board up windows, only to find all their work set back by riots at night. In some cases, workers had to reboard windows three nights in a row.

And the riot cleanup was often a solitary task for Clean Response workers. Though community members showed up in full force to help clean up the streets, they were typically prohibited from getting inside buildings due to liability reasons.

“I saw a lot of TV footage of people coming down to help clean up with brooms and shovels, but most of this work was significantly larger and required more equipment than that,” Larson says.

Inside the buildings, Clean Response workers removed damaged flooring and drywall, and extracted water that had been used to put out fires. For some businesses, such as the Lake Street Cub Foods store, workers had to remove spoiled goods.

“With Cub, it was very important to get that store cleaned out because they had rotting food and produce,” Larson adds.

As for the number of people involved in any given job? Well, that entirely depends on the size of the job, and how quickly the customer requires a cleanup. The Cub cleanup, for instance, required more manpower because it was time-sensitive. Workers needed to remove the spoiled inventory as soon as possible.

In total, Clean Response employs 50 people. In some cases, the company has had to work with other firms to handle bigger jobs, including the Cub cleanup. The company’s work is not unlike Osseo-based Clean Scene Inc., though that company handles biohazard cleanups exclusively.

Though the work can be dreary, the cleanup and restoration industry is fairly recession-proof, Larson says. He points to the recession in the late 2000s. During that time, Clean Response had one of its “best years” in recent history, he says. That was due, in part, to Iowa flooding cleanup and other jobs in the Galveston, Texas, area.