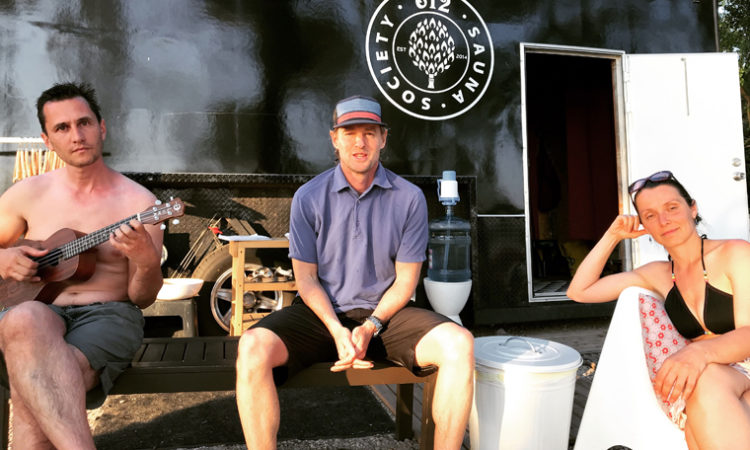 Minneapolitans John Pederson and Rod Buhrsmith believe the art of sauna (which they pronounce as “sow-na”) is something of “an equalizer”—essentially an entry point for any appreciator of hot-cold conditioning. The pair, however, did not anticipate that one of those appreciators locally would be none other than actor Owen Wilson.

The unlikely meeting, as reported by the Sauna Times, began atop the Hewing Hotel, where the Minneapolis inn features a bar, pool, hot tub and a 24-person cedar wood sauna. It was mid-Saturday during the recent toasty Memorial Day weekend and Pederson and Buhrsmith had just wrapped their weekly Saturday Shvitz on the rooftop, an event run between the Hewing Social Club and Sauna Society Builders, a sauna workshop and training company they founded earlier this year.

As the UEFA Champions League final between soccer clubs Liverpool and Real Madrid hit halftime on TV, Buhrsmith—having recognized Wilson nearby on the rooftop with a friend—approached the two and before long started “talking sauna.” Buhrsmith eventually went on to mention that 612 Sauna Society, a cooperative he also co-founded with Pederson and other members, had its mobile wood-burning sauna parked on Hidden Beach on Minneapolis’ Cedar Lake for a Memorial Day Staycation event. (Pederson at this point had left to prepare at Hidden Beach.)

But as Buhrsmith recalls, “I didn’t give him any clear directions. We just had a casual conversation about it.”

Nevertheless, Buhrsmith could tell Wilson was interested as the actor famous for his roles in Wedding Crashers, Zoolander and several Wes Anderson films revealed he had saunas in both his Hawaii and California residences.

Wilson, who Buhrsmith says was in town visiting friends, was spotted throughout the city that day. Erick DeLeon, the buyer and brand manager for high-end clothing and lifestyle retailer Martin Patrick 3, tells Twin Cities Business that the actor was among the customers they served that weekend. “He purchased a few things and was impressed with the store, saying a couple times ‘where am I again’—in reference of being impressed,” DeLeon says.

It was from the Hewing, where Wilson was staying, that he borrowed a bike to find his way to Hidden Beach. Pederson, at this point, had the 612 Sauna Society’s mobile sauna (called “The Forge”) running at full steam.

“It was a low-key afternoon. He sauna’d for a few hours with a friend of his and they left and he came back just himself before dark and asked if he could do a few more rounds,” says Pederson, who is also known as the 612 Sauna Society’s CFO, or chief firewood officer. Notably, not everyone recognized Wilson at the event.

“I always remind people how to poor water on the rocks, it’s a really important part,” he went on to say. “I was giving directions about how to pour the lÃ¶yly [meaning the steam that comes when you throw water on hot rocks] to the person in the hot seat, which I realized halfway through my conversation was Owen Wilson. So I taught Owen Wilson how to pour sauna steam from the back of the rocks forward and then give people in the room a heads up so nobody’s surprised. It’s something I’ll have to add to my Saunameister resume.”

When Wilson ventured back around dusk for round two, many of the beachgoers Wilson spoke with said he was sincere and approachable, according to Pederson—so much so that he was invited to eat dinner elsewhere in Minneapolis.

Says Pederson: “He popped up at a dinner party later that evening,” although that came after Wilson helped Pederson pack up supplies from the 612 Sauna Society mobile sauna.

“It wasn’t a starstruck paparazzi experience at all,” notes Pederson, while once again calling sauna “a great equalizer.”

The 612 Sauna Society, established in April 2017, just finished its first season. The cooperative currently has 167 members and membership to the traveling sauna club is roughly $225 after processing fees.