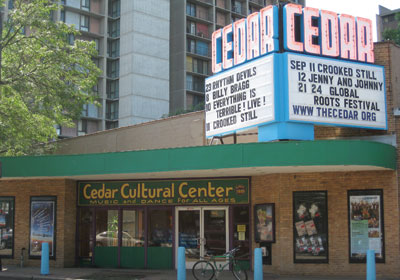 A Turnaround at the Cedar

Minneapolis’s West Bank venue the Cedar built its rep on world music: shows by African musicians or Celtic groups like the Battlefield Band or Dervish. But the live music and club scene has changed since 1989 when the Cedar Cultural Center was founded. The world-music audience has aged and drifted away to a degree, says the Cedar’s Rob Simonds. On top of that, many formerly cozy niches like world music no longer exist. The Celts are a good example of why.

Simonds, who’s been a board member with the nonprofit Cedar since 1992, took the helm as executive director in 2007 and added the role of artistic director and booker in 2008. Facing arts-funding cuts and an $80,000 hole in the operating budget for 2009, he worked out a turnaround that he believes was helped by the recession.

“It worked in part because in times of economic stress, low-priced entertainment tends to do well,” Simonds says.

“Nonprofits historically have tended to be overly dependent on outside funding and make their programming decisions less on what can be supported by public ticket buying,” he says. That can provide a venue for art that isn’t commercially popular, but it doesn’t always build audience loyalty to the venue. “You have this constant battle between what you do specifically to support your mission, finances be damned, and keeping the doors open. That’s the challenge.”

A September 27 show at the club put acclaimed jazz innovators the Claudia Quintet and the Dave King Trucking Company on the bill. Has the Cedar’s nonprofit mission—to promote intercultural understanding through presenting global music and dance—suffered from a turn toward more commercial performances like that one?

The opposite, Simonds says. By adding performances specifically designed to generate revenue, he’s been able not only to fill in budget gaps, but to spend more on mission-specific programming. Now, he says, he can book a world-music artist whose fees used to be out of reach, or bring a performer into town a day early to go into local classrooms and work with students.