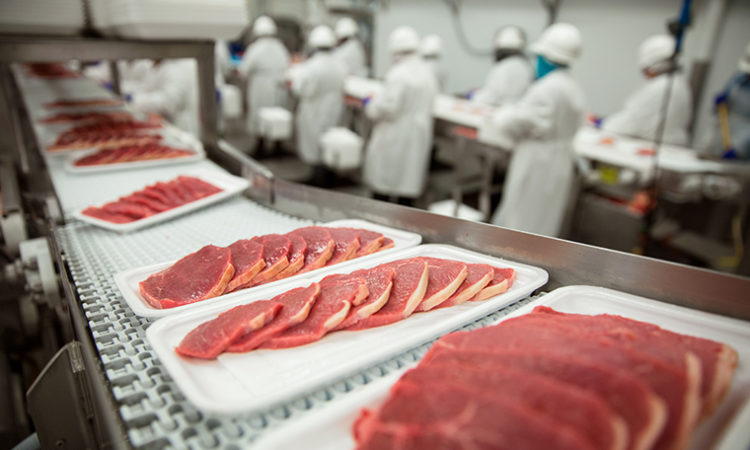 In Minnesota, over 900 meat processing workers claimed they got Covid-19 on the job and sought workers’ compensation payouts. All have been denied.
By Dan Niepow
May 28, 2021

In the early days of the pandemic, meatpacking plants were the site of some of the worst Covid-19 outbreaks in the nation. Minnesota’s meat processing industry was no exception. Yet when hundreds of Covid-related workers’ compensation claims poured in, none were paid out to Minnesota’s meatpacking workers.

That could be changing.

Last week, a nonprofit legal group announced that a JBS meatpacking worker in Texas won a workers’ compensation claim after contracting Covid-19 on the job. The company’s workers’ comp insurer initially denied the claim. But, in April, an administrative law judge ordered JBS’s insurer to pay damages to the worker, who missed weeks of work after contracting the disease. JBS did not appeal the decision.

Legal experts say it could be a sign that the tide is changing for workers’ comp claims in the meat processing industry.

“The fact is that in Texas, it’s more onerous to prove that [Covid-19 transmission] is work related than in Minnesota,” said John Malone, a Minnesota workers’ compensation attorney at Malone & Atchison. “So if it’s convincing courts in Texas, it certainly might be an indicator of what’s going to happen here in Minnesota.”

Of course, the decision in Texas “doesn’t control the outcome here,” Malone cautioned.

As of May 13, meat processing workers in Minnesota had submitted a total of 933 workers’ comp claims related to Covid-19. “Our claims database does not show that any of these claims were accepted for indemnity (wage loss or disability) benefits,” said Brian Zaidman, senior research analyst with the Minnesota Department of Labor and Industry, in an email.

But Covid-related claims have been paid out to workers across several other industries, most notably in health care. According to state data, 6,637 such claims have been submitted by hospital workers as of May 13. Over 5,400 were paid out. It’s a similar story for the skilled nursing industry, where 2,939 Covid-19 claims were submitted. Nearly 2,300 of those were paid out.

For Covid-19 transmission in health care, Minnesota law is generally on the workers’ side. Health workers “are presumed to have contracted a workers’ compensation occupational disease if they become ill with Covid-19,” according to a fact sheet from the state’s labor department. The same is true for any other workers on the “front lines” of the pandemic, such as first responders.

For all other workers, though, it’s a bit tougher to prove they picked up Covid on the job. Employers could argue, for instance, that the worker caught the disease at a grocery store, or from a family member.

“You very rarely can prove, beyond a shadow of a doubt, where it was contracted,” Malone said.

Still, the fact that zero Covid-related workers’ compensation claims have been paid out to meat processing workers is notable, especially given the number of claims that have been submitted.

“When the numbers are that staggering, it would suggest to me that claims are not being evaluated on an individual basis, but that a policy decision has been made to deny all claims regardless of merit,” Malone said.

JBS USA, which operates a pork plant in Worthington, Minnesota, has disputed that claim, though. In February, the company told the Star Tribune that it reviews “each case thoroughly and independently.” The company did not immediately respond to a request for comment on this article.

United Food and Commercial Workers Local 663, the union that represents JBS’s Worthington workers, declined to comment on the news in Texas.