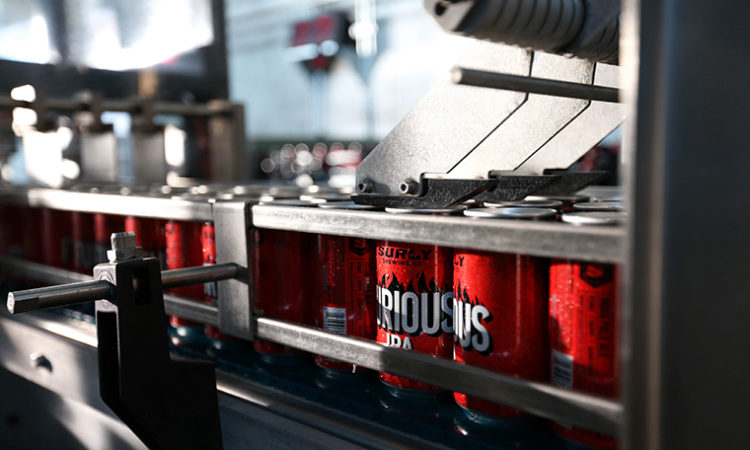 A Storm is Brewing for Minnesota’s Craft Breweries

As the economic impact of the pandemic deepens, the state’s breweries are scrambling to find new sources of revenue.
By Kait Ecker
April 15, 2020

Remember the days of gathering at a bustling open-air brewery? You may miss soaking up Minnesota’s beer culture, but the state’s breweries are missing out on a significant chunk of revenue. Now, they’re scrambling to find a way to keep the lights on and continue selling their products.

The state restrictions have limited breweries’ ability to sell the beer waiting in their tanks, with no on-premise sales, canceled events, reduced off-sale revenue, and diminished distribution to all of the bars and restaurants, which can’t sell alcohol now. (Though some state legislators are working to change that.)

The majority of the state’s breweries have slowed production and laid off or furloughed employees, according to a survey by the Minnesota Craft Brewers Guild. Some have even had to dump product because it’s expired. And breweries’ distribution footprints factor into their ability to make enough revenue to survive the pandemic and ensuing recession, said Lauren Bennett McGinty, executive director of the Minnesota Craft Brewers Guild.

“A lot of the smaller breweries in Minnesota are probably more greatly impacted. Especially if they’re not distributing or canning or mass bottling their products to be sold in liquor stores, they’re probably struggling a little bit more,” she said.

The decline in foot traffic is impacting sales for brewers big and small. For some of the bigger breweries, sales are down about a third overall from the loss of taproom business, McGinty said.

Surly Brewing Co. has lost 40 percent to 50 percent of its revenue volume from the brewery due to restaurant and bar closures, said founder Omar Ansari. Even with liquor store sales up, there are still substantial losses from the closure of its event center, restaurant, and beer hall.

“We ended up furloughing or reducing the hours of pretty much all the employees on that side of the business,” he said. “That’s a lot of the company, a lot of revenue, a lot of paperwork. So we furloughed some salespeople and cut down on marketing. It’s affected everything at the company since it happened.”

With no end of the pandemic immediately in sight, some breweries are planning for the worst case scenario.

“In the hospitality trade, concern is pretty much at the forefront of everyone’s mind,” Ansari said. “We all kind of struggle to get through January and February. Then May, June, July, August is where you really fill the place up and pay for everything for the year.”

But event-centric places like Surly recognize there’s not much to do.

“We’re not going to be able to change the outcome of it,” Ansari said. “It’s day-by-day, trying to figure out where we’re at. When we can open up, we will be ready to do it, but planning in the uncertainty is the most challenging piece.”

The clincher is that breweries can’t just flip the switch and become fully operational again; beer isn’t brewed overnight. Then there’s the uncertainty around bringing staff back.

“I really stress for people when they go to their liquor stores that the beers they decide to buy are the breweries that they want to keep open,” Ansari said.

Like Surly and other breweries with kitchens, the Urban Growler has been doing food and beer takeout. And that helps.

But owners Deb Loch and Jill Pavlak have seen what was going to be one of their biggest years yet go down the drain––quite literally as they turned their winter beer into hand sanitizer. They’ve gone from a team of 50, to 10 people working 12 hour days, just to keep the doors open. Looking toward the summer, the last thing they need is additional debt from loans.

“What we don’t need is more loans. We actually need more grants,” Loch said. “We take it week by week. For us, our money-making season is the summer and the winter is to survive. So if we don’t make money this summer, then it’s gonna be real tough to make it through the winter.”

Like many small companies across the country, Urban Growler has applied for the Small Business Administration’s Paycheck Protection Program, which provides partially forgivable loans. But Loch fears that the program won’t be sufficient if social distancing measures last longer than three months. 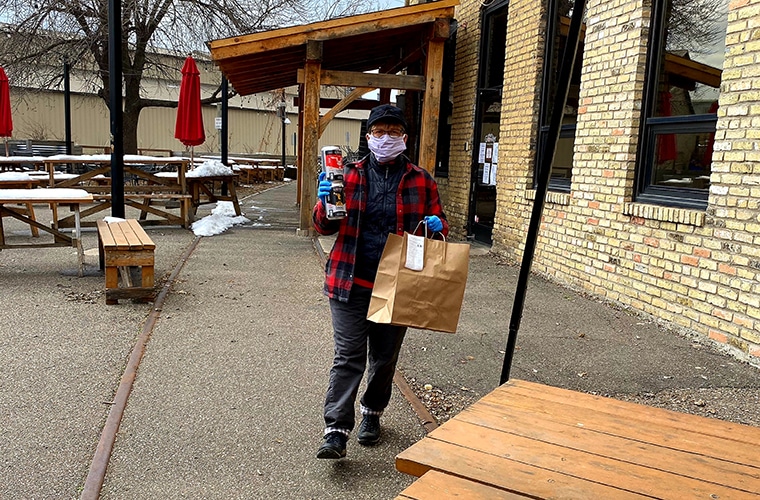 Still, loyal Urban Growler fans have showed up to purchase food and beer, and to pitch in however they can. One customer, for instance, contacted the city to fix potholes near the brewery; smoother roads provide a competitive advantage, Loch added.

“When you see the majority of your business evaporate overnight, it’s tough and brutal, but we’ve always felt like we were a part of the community,” Loch said. “They’re doing everything they can to support us.”

The community has let them know they’d like to see the brewery come out the other side intact.

“I was moved to tears for two solid weeks from the comments people were making. And they want us to survive,” Pavlak said.

On the other side of this, Urban Growler owners are looking at how to operate a taproom and restaurant that would be safe for staff and patrons.

“It’s going to have a major impact on our industry. I think how we emerge from this––we will probably look a lot different,” Loch said. “I know probably some of the folks that have bigger cash reserves are probably going to be able to weather it better than those that don’t. And it’s going to be a long process.”

Wooden Hill Brewing Co., which has cash reserves and no debt, is prepared to weather the pandemic and recession, said co-founder Sean Ewen. While it’s seen a 50 percent cut to its sales, Wooden Hill has not had to lay off or furlough anyone yet.

But Ewen also sees the return to normal––or a new normal––as a slow process, with remnants of social distancing being a requirement for reopening.

Likewise, Drew Hurst, director of operations at Bauhaus Brew Labs, said he predicts the industry opening happening in two stages: the government’s okay to open, and society’s okay to congregate.

“It can be tough, because even if the restrictions lift tomorrow, I don’t know that people are going to be terribly comfortable going to busy taprooms for a little while,” he said.

As Bauhaus looks at a calendar of cancelled events, sales from takeout and delivery aren’t going to be enough to keep things afloat in the long run, Hurst said.

“I think we’re in an awkward spot where we’re not as big as say a Surly or Summit, but we’re also not one of the little guys. We’ve got pretty substantial overhead costs and things like that. I know a lot of breweries are gonna feel that, and we’re talking about an industry that runs on pretty thin margins as it is already,” he said.

Nationally, the numbers aren’t looking good. The latest survey from the National Brewers’ Association showed the majority of breweries not being able to last more than three months amid current social distancing measures.

Right now, Bauhaus is running on a skeleton crew, and––like everyone else––is anxious about the lack of a light at the end of the tunnel.

“It’s a pretty big blow to morale, but I do think everyone who’s involved in pretty much every level is doing a pretty amazing job of trying to keep spirits high as much as possible and really hunkering down and trying to make this all work,” Hurst said.

As it stands, beyond anything that’s distributed to liquor stores, breweries are limited in what they’re legally allowed to sell via curbside pickup.

“We’re only allowed to sell growlers and crowlers, which are the two most labor intensive and inefficient means of packaging vehicles, for shelf life and in terms of actually packaging,” Hurst said.

The ability to actually sell canned beer out of their own doors would help breweries, especially as the margins they see from distribution sales are tighter. And with some distributors like restaurants and bars not purchasing beer anymore, there’s the fear of having to dispose product if they’re not able to sell it.

“We have a lot of that stuff right now that’s not going to distribution, and that we are continuing to package because we have to empty tanks,” Hurst said.

To prevent the dump of inventory, the Brewers Guild is working with the governor’s office to get a notice of regulatory relief, said McGinty.

“Basically, what that would do is it will allow bars, restaurants, and breweries to sell whatever products that they have on hand, obviously, in safe, sealed containers, and for at-home consumption only,” she said. “It’s just a way to help breweries and bars and restaurants move that inventory that they’re sitting on.”

McGinty said she hopes to get movement on the regulations within the week, so that the products don’t go to waste and businesses can see more cash flow.

“The biggest struggle is not knowing if you’re going to have employees on the other side of all this,” she said. “Then you’re looking at breweries who are stretching themselves very thin.” 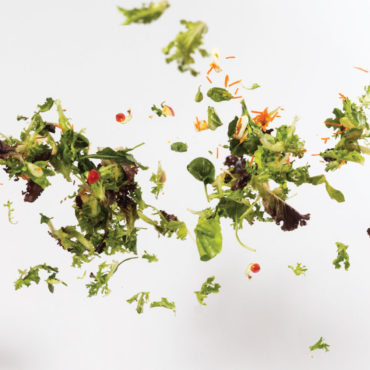 Who Will Win the Salad Wars?