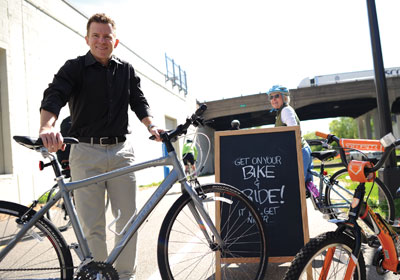 A Ride Wherever You Go

Think of Velolet as a rental car company, but for bikes.
By Gene Rebeck
August 01, 2011

Twin Cities entrepreneur and inveterate cyclist Dan Cleary loves to ride wherever he travels. But he was finding that shlepping his bike with him on airplane trips was like pedaling into a stiff wind. The cost was nearly that of a one-way ticket; what’s more, he had to take his ride apart before the flight and put it back together upon arrival.

Cleary tried renting, but “it’s not all that easy to find bike rentals, because most small bike shops—and there about 5,000 of them in the U.S.—don’t have the capacity to manage reservations,” he says. There was no guarantee that the bike you reserved in Minneapolis would be waiting for you in Seattle. “The mechanic may have written the information down on a scratch paper, and no one looks at it again,” Cleary notes.

In early 2010, Cleary took his background as a business consultant specializing in high tech down a different trail. By January of this year, his new venture, an online bike rental service called Velolet, went live to the public; by June, 30 shops across the country were listed on the site. Cleary estimates that Velolet has facilitated 275 days of rentals since February. Velolet covers the liability insurance ($1 million per rental), saving the shops thousands in premiums. Listings are free; Velolet takes a small percentage of each rental.

Freewheel Bike, a bicycle retailer and repair shop with three Twin Cities locations, signed up with Velolet in February. While Freewheel already had its own rental program in place, Jake Helmbrecht, Freewheel Bike’s general manager, says that Velolet offers “a nice, smooth, easy way” to organize rentals. Helmbrecht adds that Velolet has helped Freewheel recoup much of the rental income that it lost when Minneapolis introduced the Nice Ride program in 2010.

Helmbrecht also credits Cleary with being “receptive to what shop owners need, and ways to improve the service.” Cleary himself believes that this market receptivity helped him refine the concept, leading “to more client adoption.” Acceptance by top locals like Freewheel, he has found, makes other area shops more likely to sign on.

Cleary continues to develop more services. In April, he introduced a tool to allow bike shops to offer concierge services, such as bike delivery, helmet rentals, and so on as add-ons to the rental. In late May, Velolet created an online tool for event promoters of cycling events, like this past June’s Nature Valley Bicycle Festival in the Twin Cities.  The software tool matches up event participants with bike rentals.

Educated as an accountant (he also has an MBA from Columbia University), the Ohio-born Cleary worked in Osaka, New York, and San Francisco as a business consultant and tech entrepreneur before coming to Minnesota in 2001 to become the managing director of hedge fund Deephaven Capital Management. He struck out on his own with business partner Brian Lipschultz in 2007 and cofounded Eagle Street Partners, a Minnetonka-based investment and business management firm. Eagle Street is currently focused on True North Tower, a Sauk Rapids–headquartered cell-tower construction company that Eagle Street acquired in 2008 and has grown into an Upper Midwest operation. True North’s market isn’t limited to Verizon and AT&T: Utilities and emergency services have their own wireless systems and thus their own towers.

In short, Cleary has two full-time jobs. Regarding Velolet (which he runs independently from Eagle Street), Cleary says: “We’re up and running, we’re profitable, we make money for the bike shop, and it works.” The next leg of the ride: raising funding for expansion domestically and internationally.