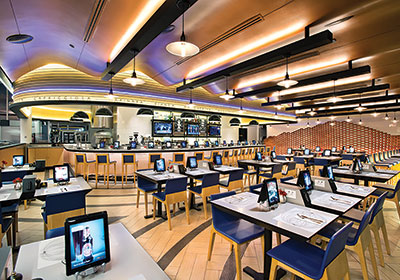 A Revamp Of Concourse G Pays Off

The revamp of MSP airport’s Concourse G is paying off for travelers and the airport.
By Liz Fedor
April 01, 2014

Two winters ago, OTG Management promised to transform the “airport experience” for local travelers. Passengers in Concourse G have responded to OTG’s high-tech, food-first makeover by opening their wallets.

Delta Air Lines enlisted OTG to bring a contemporary look and feel to Concourse G, the only wing of the airport it controls, and the company created a high-tech foodie haven that features sustainably sourced foods in restaurants led by high-profile local chefs such as Lenny Russo and Andrew Zimmern. OTG launched its wholesale renovation of the concourse in early 2012 and is finishing this quarter.

The result: Sales are up about 25 percent for food, news and retail purchases in Concourse G. “In 2013, the OTG concepts generated an estimated $23.5 million in sales,” says Patrick Hogan of the Metropolitan Airports Commission (MAC). That compares with $18.8 million in concourse concession sales in 2011.

The Airports Council International–North America was impressed with the revolutionary changes in airport dining and ambience. It recently honored MSP with a first place award for the best food and beverage program at large airports.

“The new seating configuration in the gates has taken a while for some people to get used to, as has ordering food and drink from an iPad rather than from wait staff,” says Hogan. “However, there is actually more gate seating with the new layout than there was before. People can sit, plug in electronic devices or use one of the provided iPads regardless of whether they order anything.”

Hogan says that gross food sales in Concourse G skyrocketed by 44 percent in 2012 compared with 2011, the last year of management by HMSHost. But he adds that OTG includes food purchases at newsstands in its count, whereas Host allocated those transactions to news sales.

Through 2015, Delta has exclusive control of all of Concourse G, covering concessions and public spaces as well as gate areas. Delta gets 85 percent of the concession rent revenue; the MAC receives the remaining 15 percent. When Delta’s exclusive lease expires, Hogan says, “the concourse becomes like all the others, in which the airline pays for the actual space it uses and the concessions and public areas revert to the MAC’s control.”