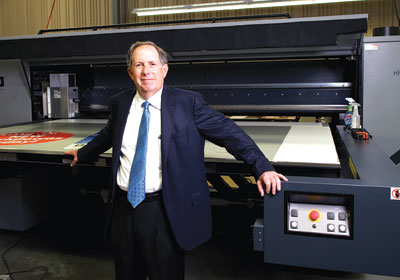 A Printer for the Digital Age

While other printers have closed up shop, Ambassador Press has anticipated changes in the market and stayed on top.
October 11, 2010

During the Internet age, many have predicted the death of print. As Ed Engle, CEO and president of Minneapolis-based Ambassador Press—which celebrates a half-century in business this year—can tell you, those death notices have been greatly exaggerated.

That said, digital technology has been a key reason why Ambassador has hung tough while other printers have suffered worse and even gone under. Last year, Ambassador topped $16 million in gross revenue. That was 10 percent off its previous annual earnings, but not at all bad, given the general doldrums of 2009.

“We work hard, we’re smart, and we’ve had good luck,” says Engle, who bought the company from his uncles, Marvin and Barry Engle, in 1994 after working there on and off since his junior high school days.

The Engle brothers founded Ambassador as a general commercial printer in a former livery stable in the Warehouse District’s “Printers Row” area. The company later moved to Golden Valley for a few years, then returned to central Minneapolis. It’s now housed in a 78,000-square-foot space on Washington Avenue North. Customers, mostly local but many worldwide, include marketing, manufacturing, medical technology, insurance, and retail firms.

Ambassador does offer traditional printing services, such as custom binding and mailing. But currently, retail signage is Engle’s biggest growth area: “The market may have changed in the last five to 10 years, but people always need signage and displays.” Ambassador has moved with that market: In 2006, it spent $8.5 million for a large-format press and recently invested $600,000 in a new digital flatbed printer.

“The flatbed can print things up to two inches thick, so we can supply stores with the large banner and store displays they need and still do their mailers and things, too,” Engle says. Ambassador has also invested in computer-integrated manufacturing, which improves efficiency by automating processes like cutting.

“We’re always looking for things we can offer that will have us competing with three or four people instead of 20 or 30,” Engle says. One of his company’s innovations is AMB Solutions, a Web-based program designed to speed up the reorder process for clients with recurring projects.

Printing has long been a chief industry in Minnesota. At the end of 2009, there were 737 companies employing 34,411 people and generating nearly $5.6 billion in sales, according to the Printing Industry of Minnesota, a trade organization of which Engle was board chair until April. Since then, 10 to 15 percent of state printers have folded.

But Ambassador is looking ahead to its next 50 years. Engle is transitioning leadership of Ambassador to his children, Candice Engle-Fieldman and Harold Engle. “They’ll handle the day-to-day processes and I’ll keep my eye on new processes so we always know where we’ll need to be in the next five years,” he says.