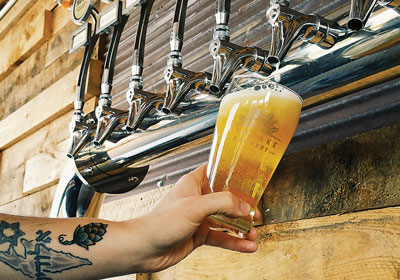 A Pint Of Cheer

Toast to clients’ good health and wealth with an Oktoberfest at a craft brewhaus.
October 10, 2015

If it’s a beautiful autumn afternoon, heed the call of the rooftop patio at LynLake Brewery. If it’s snowing, score a table inside the taproom, located in the former Theater Antiques space. Peruse the menu of craft brews including Whittier Wit witbier, Rubbish oat amber ale, and Sideburns milk stout. While you’re debating the merits of nitro vs. casks, Japanese hops vs. American, call up Taco Cat and order an outlaw taco, filled with slow-roasted pork and kimchi, and a Ruckus, made with grilled steak and chimichurri, with free delivery via bicycle to your table.

Clients who speak Brooklynese will enjoy a visit to Nordeast, the Williamsburg of the Twin Cities. Begin with a drive around the president streets, so named for Washington, Adams, Jefferson, and others, in the order they were elected, and then circle back to New Bohemia. Join a tableful of locals and order a pint of Hammerheart Serpensblod, brewed in Lino Lakes. As it’s October, go all-in with German sausages, German potato salad and an outsized German-style pretzel.

No tour of Twin Cities craft breweries is complete without a pilgrimage to Surly, the brewery that helped drive Minnesota’s 2011 “Surly Bill” at the Legislature, allowing small breweries to open taprooms. Join the denizens of Surly nation, as fans are known, at the lengthy bar, or sit outside in the beer garden. Browse the menu of bracingly non-Minnesota Nice branded ales including Cynic, Furious, Overrated and Schadenfreude, and settle on a pint of #Merica! with braunschweiger and saltines, or merguez lamb sausage with a tall, cool glass of Hell.

Clients who value adaptive reuse will appreciate Midtown Exchange, the former Sears Roebuck building, now a mixed-use mÃ©lange of condos, offices and the colorful Midtown Global Market. Take a spin through the market and end up at Eastlake Brewery & Tavern. Order a pint of Nicollet Mauler, Devil’s Kettle IPA, or a One Two Punch (half-beer and half-locally brewed Deane’s kombucha), and tell the bartender you’d like a Cubana from Manny’s Tortas, fajitas from El Burrito Mercado or an Indian-style burrito from Hot Indian Foods, delivered straight to your bar stool.

For a uniquely Minnesota experience, take your out-of-town clients to Urban Growler Brewing, the first female-owned microbrewery in the state. Situated in a historic building that once stabled the city of St. Paul’s horses, Urban Growler brews ales, porters and other beers including Midwest IPA, winner of a blue ribbon at the Minnesota State Fair, and the signature Plow-to-Pint series made with locally grown wild rice, blueberries, pumpkins and other seasonal produce. Sit out in the beer garden with a pint of CowBell cream ale and savory Reuben sandwiches layered with corned beef slow-roasted in oatmeal stout, followed by rich brownies made with their De-Lovely porter.