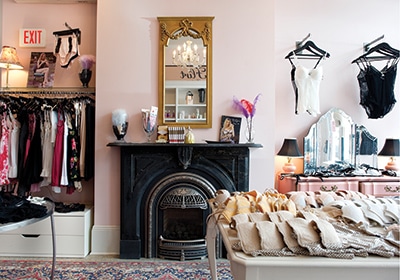 A Look Inside Flirt Boutique

When Jessica Gerard opened St. Paul lingerie shop Flirt Boutique, she wanted it to be “sophisticated and playful at the same time.” She felt Victoria’s Secret styles were so youth-oriented they left a swath of women craving something more grown-up. “I felt like there was this whole gap for the more mature woman who doesn’t necessarily want something funny on her thong,” she says. So she curated her selection based on pin-up girls and vintage Hollywood glamour to create a more elegant aesthetic.

Gerard had owned a vintage home furnishings and gift store called Vagabond on St. Paul’s Grand Avenue, which she ran from 2005 to 2008. When the economy turned, she closed for three weeks and reopened as Flirt Boutique. She started carrying cozy sleepwear and gifts before dipping her toe into numerically sized lingerie—which quickly became her bread and butter after her first run sold out in days.

A year later, she relocated Flirt to a smaller space at the corner of Selby and Snelling avenues, which proved instrumental to growing sales: “When I moved, my rent [dropped] in half and my sales immediately doubled,” she says. What the current location lacks in foot traffic it makes up for in visibility: Some 60,000 cars pass that corner daily.

While some of Gerard’s regular customers treat lingerie as a collection, others are 20-somethings who return for bridal shower and bachelorette party gifts. A quarter of sales come from men, some of whom purchase from client registries the store maintains.

“When I opened, there were no other lingerie boutiques in the Twin Cities,” says Gerard, “so I feel like I have a few years’ head start” on competitors like Edina’s Room Number 3, which sells clothing alongside its lingerie. She says her strongest competition locally is Nordstrom, which has a “really nice, higher-end, more sophisticated lingerie selection.”

Gerard says her boutique stands out because today, “everything’s kind of becoming unisex, and Flirt is a place that embraces femininity. I think women long for that.”

25% percent of sales are from male customers