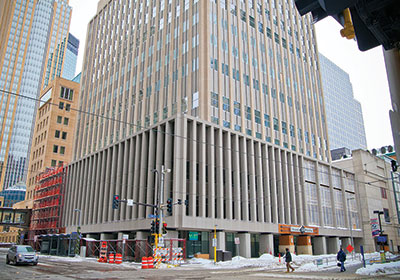 A 30-year-old downtown Minneapollis retail business tries to keep its edge while operating from a shuttered building.
April 01, 2014

Right now, Fifth Street and Marquette Avenue in downtown Minneapolis is home to the skeletons of construction projects. Two corners have been claimed for upscale apartment buildings; meanwhile, new owners have major plans for the office buildings at the other two corners. What’s good for downtown, though, hasn’t necessarily been good for one small, very exposed business.

Sew Biz Tailoring has been a tenant of the 510 Marquette Building for 32 years, says owner Laurine Lewis. She has seen many changes nearby as owner of the alterations and dry cleaning shop. Light rail outside her door brought disruption, followed by a boom in business when it reached completion.

But since Opportunity Advisors—an affiliate of Eden Prairie-based Excelsior Group—purchased 510 Marquette and closed it for renovations, Lewis has been isolated, and her business has struggled. Loss of skyway access has handicapped the business, she says. Since Sew Biz and Nicollet Station Dental will be the only tenants in the building for some time, foot traffic is nil.

Lewis still has two years on her lease but has been told it might not be renewed. She’s looking for a new location—still downtown so she can remain close to loyal customers. “If it’s not convenient,” she says, “it does test loyalty.”

Proximity doesn’t appear to be an issue for Lewis’ longest-term clientele. Customers who have since moved from the Twin Cities send items to her from all over the country. “I have a lady in Hawaii,” Lewis says, “[who] mails stuff to me.”

Despite challenges, Lewis is passionate about her work. She has always loved sewing—“since I was 10 years old,” when she played with her grandmother’s sewing machine. After graduating from college with an English degree, Lewis began working at Top Shelf in LynLake, where she honed her tailoring skills. While working as a law firm receptionist, she took a sweater into Sew Biz for repair and hit it off with the owners. Lewis was hired in 1983, and shortly after they sold her the business.

Lewis is philosophical in the face of the current uncertainty: “No matter how long you’ve been in business, you’ll have logistical challenges.”