Cleaning tools of the future are coming soon to a Best Western near you.
September 07, 2012 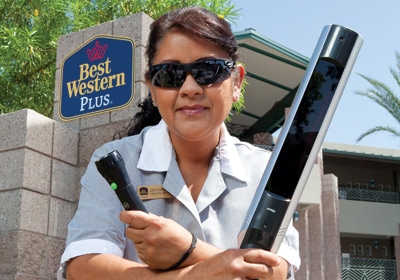 Black lights and UV wands have moved beyond CSI into Best Western hotel and motel rooms across the country.

As part of the Phoenix-based hotel group’s new cleaning initiative, a housekeeper will go through a darkened guest room with a black light to highlight biological debris that may have been missed by the naked eye. They also clean all of the “high-touch areas” such as doorknobs, phones, TV remotes, and the sink and toilet area with an ultraviolet wand that kills 99.9 percent of germs, according to the company.

The Best Western Plus Bloomington Mall of America was one of 800 across the country that first implemented the “I Care Clean” program before a full rollout to more than 2,100 hotels. Mark Olson, general manager, is happy with the effort. “Our labor costs have not gone up. We’re using the same cleaning staff and it really isn’t adding more than 5 minutes to the normal routine,” says Olson.

The UV wand may be the sexiest aspect of the new regime, but other practices are probably no less reassuring to guests made paranoid by years of TV news exposÃ©s. There are new TV remotes—typically one of the dirtiest items in rooms—with flat, seamless buttons that can be wiped down and sanitized. Best Western also wraps stored pillows and blankets in biodegradable single-use bags after washing to assure the user they are totally clean.

Best Western grades each of its hotels on cleanliness twice a year. The Bloomington property’s score from September 2011 was 965 out of 1,000; its increase to 994 in May 2012, after beginning the “I Care Clean” program put it in the top 10 percent of Best Westerns in North America, according to Olson: “It’s just one more thing we can use to reiterate how important clean is to us.”