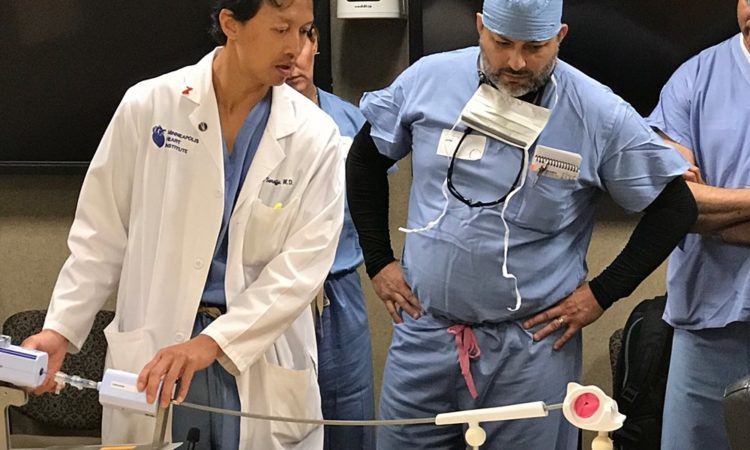 “Both of my parents died of heart attacks at relatively young ages,” said Headrick. “Obviously my genetics were not very good.”

Headrick is best known locally as the president, CEO and part owner of the Minnesota Vikings from 1991-1998. He departed from the team after it was sold to Texas businessman “Red” McCombs in 1998.

“The real importance here is not me or Lynn or the family, it’s what the Heart Institute is doing and can do with a little bit of help from us,” said Headrick. “They’ve got the people and they’ve got the capability and they’ve got the right focus to deal with valvular heart disease and take a lead in at least the U.S., if not the world.”

MHIF has been seen as a pioneer in its work on heart valve disease. MHIF doctors performed the first-ever implant of a transcatheter mitral valve replacement in the U.S. in 2015. The procedure inserts a replacement valve which is delivered through a catheter.

For that first procedure, MHIF doctors used a device developed by Roseville-based Tendyne Holdings Inc., which was acquired Illinois-based medical device giant Abbott Laboratories in 2015. The Tendyne product is still not available for commercial sale.

In June Dr. Sorajja performed the 250th mitral heart valve procedure to be done by MHIF doctors using the MitraClip, another device. The MitraClip, made by Abbott Vascular, is commercially available.

“Valvular heart disease is a public health crisis. Therapy can be lifesaving, and yet countless people go untreated,” said Dr. Sorajja in a statement.

More than 3.2 million Americans have been diagnosed with heart valve disease.

Former U.S. Senator Dave Durenberger had the minimally invasive valve replacement earlier this year. Dr. Sorajja performed the procedure, which was part of a MHIF clinical study. Durenberger represented Minnesota in the U.S. Senate from November 8, 1978, to January 3, 1995.

“The MHIF Valve Science Center is vital to saving lives, but also to the future of medicine,” said Sen. Durenberger in a statement. “MHIF has pulled together an unusually focused team of physicians determined to move toward data-driven, evidence-based medicine. From a policy perspective, that is the future.”