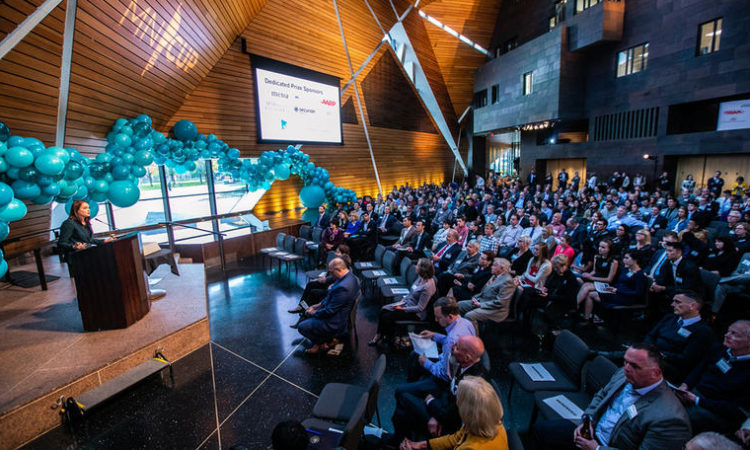 This year’s candidate pool was the most diverse yet; 43 percent of applicants were female and 36 percent were people of color. The semi-finals phase wraps in August, and winners will be declared in October.
By Amanda Ostuni
June 25, 2019

The U of M’s Carlson School of Management has announced the 88 semifinalists in the 2019 Minnesota Cup entrepreneurial competition. This year, which marks the 15th anniversary of the statewide competition, the semifinalists were chosen from a pool of nearly 1,000 candidates.

The applicant pool returned to normalcy after last year’s record-breaking applicant count of 1,661, but this year’s pool was the most diverse pool in MN Cup history, with 43 percent of candidates being female and 36 percent being people of color.

MN Cup director Jessica Berg says it’s hard to pinpoint the reason for the increased diversity, but she has a few ideas.

“We are always trying new things in terms of how we reach out to aspiring entrepreneurs, in addition to people who are serial entrepreneurs,” she says. “Some of that can just maybe come through continued partnership with other organizations.”

Along with an expanding candidate base, MN Cup has added more and more categories over time. That includes last year’s addition of the “education and training” category, which brought the total number of categories to nine. With the added division, the total prize money available hit a record $500,000 in 2018. That same amount will get distributed this year across all nine categories.

Each category typically is narrowed down to 10 semifinalists. But this year, the competition in the Energy Clean Tech & Water division yielded just 8 semifinalists. Berg says it’s not uncommon for some categories to be less competitive than others, and the popularity of certain categories fluctuates year-to-year based on various industry factors.

Criteria and the 2019 Contenders

Each year, judges observe a number of key themes among competitors. Cargill global bakery leader and longtime MN Cup judge Sonia Punwani says three themes emerged in the food/ag/beverage division this year: the story behind ingredients and sustainable sourcing; targeting specific ethnic flavors; and a focus on efficiency, ergonomics, and safety within the food supply chain.

To whittle down the competition field to just 27 candidates for the final round, judges must look past the common threads to find what sets certain entrepreneurs apart. It comes down to three things: opportunity, plans, and progress.

“We’re looking at the business opportunity and saying, ‘Is there truly a consumer pain point that the innovation or startup is trying to solve’?” says Punwani. “And then…what’s the culture of the team? Do they have partnerships within the local community that’s going to help them be successful in the future?”

She encourages the 88 businesses still in competition—and those who enter in the future—to take advantage of the access they have to expertise and experience from judges and mentors.

“No single company alone can solve the greatest challenges facing [the world],” says Punwani. “So [MN Cup] is really this opportunity for startups to learn. … How do we foster an innovation of culture together?”

That’s been MN Cup’s aim, and Berg says the organization hopes to build on that effort in the future. This means, in part, acquiring more funds to give to entrepreneurs. To that end, MN Cup leaders have launched a new crowdfunding effort.

“That’s going to be an exciting part of how we think about getting more individual community support for these startups,” says Berg.

In the meantime, the competition as it stands will continue. The 2019 semi-finalists are currently developing a business plan, pitch deck, and video, which will be reviewed in August to determine who moves on.

A couple semi-finalists include: Farm Vision Technology, which is focused on the commercialization of computer vision systems to enable growers to monitor the count, size and health of their plants; and Busy Baby, a veteran- and woman-led company that created the first FDA-approved, food-grade silicone placemat to keep children’s toys in place.

Three finalists will be selected in each category to compete in the next phase in September. The grand prize winners will be named during a ceremony in mid-October.

Says Berg: “It will be our biggest and best celebration yet.”