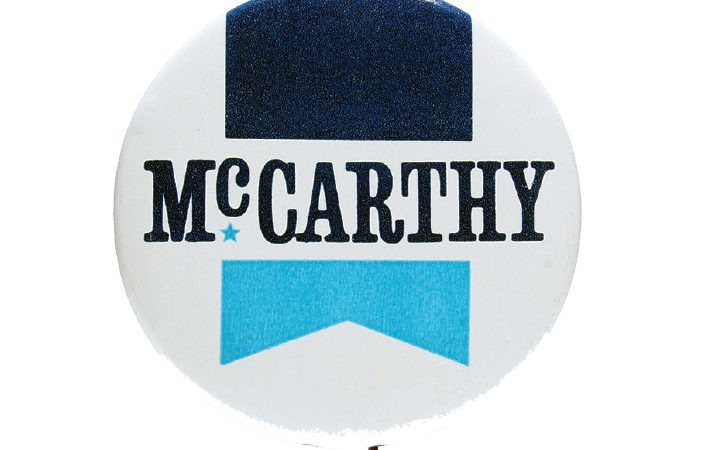 50th Anniversary of the Year That Changed Everything: 1968

We also know from those experiences 50 years ago that idealistic and principled political leadership, supported by the enthusiasm and energy of youthful followers, can help change the trajectory of American politics.
October 02, 2018

Dear Classmates:
The media constantly tells us that this is the worst of times. We know that today does not hold a candle to the real year that changed everything: 1968. It was a year dominated by assassinations, student protests, urban riots, the war in Vietnam, and Gene McCarthy. It was the year that capped a decade that Peter Jennings called “into the streets.” And into the streets we all went.

The civil rights movement had been gathering steam and popular support throughout the entire decade. Importantly, movements are successful when they solidify their demands in statutory language. Much of that success was due to the movement led by the prophetic voice of the Rev. Martin Luther King. In late March of 1968, the Rev. King went to Memphis, Tennessee, in support of the sanitation workers’ strike. On April 4, he was fatally shot on the balcony of his hotel by a white supremacist, James Earl Ray. Into the streets!

The country exploded in riots in more than 100 cities, leaving 39 people dead and more than 21,000 arrested. The last statutory success of the American civil rights movement, the Fair Housing Act of 1968, was signed into law one week later, on April 11.

Anti-war protests were a daily occurrence. Students took over Columbia University, which led to more than 700 people arrested and over 150 people injured. Activists broke into Selective Service offices in Catonsville, Md., and destroyed nearly all of the draft files. The example of the “Catonsville Nine” spurred 300 similar raids on draft boards all over the country. 1968 was the year that Walter Cronkite told a believing nation that the war was lost. The Tet Offensive underscored his prediction.

In fact, so great was the popular uprising against the war in Vietnam that President Lyndon Johnson announced on March 31 that he would not seek reelection. Most of us remember where we were on that day. President Johnson not seeking reelection was described by one of his close Texan colleagues, Rep. Wright Patman, as a “Pearl Harbor in politics.”

Patman got the geography wrong. It wasn’t Hawaii that did in Lyndon Johnson, it was Minnesota Sen. Gene McCarthy’s showing in the New Hampshire primary on March 12. While the prevailing youth culture at the time supported a hippie-like unkempt appearance, with long hair, to be involved in a Gene McCarthy campaign, one had to be “Clean for Gene.”

McCarthy’s showing in the New Hampshire primary also impelled one politician into the presidential race, Sen. Robert F. Kennedy. Kennedy had been quietly critical of the war in Vietnam, and seemed sincerely interested in addressing the issue of income inequality in our urban centers. He, too, mobilized a large number of idealistic followers. During this time, for many of us, it seemed that youthful energy coupled with idealism was the new political order of the day. Once again, an assassin’s bullet ended that dream when Kennedy was shot by Sirhan Sirhan.

If there was to be redemption in channeling idealism into the political process, the next opportunity where that could have occurred was at the Democratic National Convention in late August. But the convention was rigged; most of the delegates had been selected by party bosses, not by primaries. Vice President Hubert Humphrey, also from Minnesota, had not been a candidate in a single presidential primary. National television carried hours of live footage showing National Guardsmen and police on a rampage, clubbing and tear-gassing hundreds of anti-war demonstrators, news reporters, and bystanders. Humphrey won the nomination. George C. Wallace, governor of the sovereign state of Alabama, ran on an expressly white supremacy ticket and ultimately won five states in the general election.

1968 saw Richard Nixon win the presidential campaign with only 43 percent of the vote; we all know how that worked out. The decline of morality in public leadership started with the Vietnam War, and continued with lies, dirty tricks, and the Watergate scandal of Richard Nixon.

Ah, the draft. The biggest difference between today and 50 years ago will be found on the campuses and in student activism—or the lack of it. When the draft ended, and the Vietnam War ended, the impetus for self-interested student protests ended as well. With the assassinations of Sen. Robert Kennedy and the Rev. Martin Luther King, cynicism took over the political process; leaders who challenge the status quo will be gunned down. That cynicism about political leadership has continued to grow to this day.

We also know from those experiences 50 years ago that idealistic and principled political leadership, supported by the enthusiasm and energy of youthful followers, can help change the trajectory of American politics. In 1968, Gene McCarthy stood up and an incumbent president stood down. Gov. John Kasich?