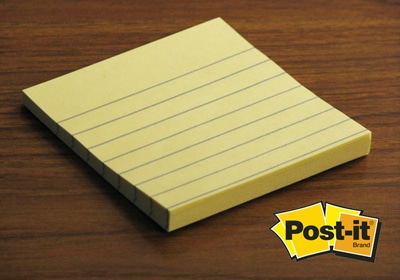 3M Sued By Man Claiming Post-it Notes Were His Idea

3M is being sued for fraud for the second time by inventor Alan Amron, who claims Post-it Notes were spurred from his idea for “Press-on Memos.” He filed his suit on Monday.

Amron originally went after the Maplewood-based manufacturer in 1997 after hearing 3M say it was the inventor of the sticky note idea. That lawsuit was settled in a month’s time, the Star Tribune reports. But now Amron is claiming that 3M violated the terms of the agreement.

“It was understood that 3M agreed not to continue saying they invented the sticky note, and to pay the inventor for his legal costs in the case,” Amron said in a statement.

In the new lawsuit, Amron contends that 3M “illegally utilized” his Press-on Memo and adhesives (called “Stickem up”) products after receiving samples of them at the 1974 International Inventors Expo in New York. He also alleges 3M “took” his ideas “willfully and with malicious intent” before ultimately trademarking “Post-it” seven years later in March 1981.

3M spokeswoman Donna Fleming Runyon said Amron’s claims are “without merit.” She added, “’Post-it’ is a registered trademark of 3M…[with] roots dating back to 1970, when 3M filed a patent for the unique adhesive that has made Post-it Notes so successful, which is long before Mr. Amron claims to have invented sticky notes.”

3M scientist Spencer Silver and his colleague Arthur Fry are credited for inventing the original yellow-colored sticky note pads. The manufacturer launched the product in 1977—dubbed “Press ‘n Peel”—and then re-introduced it in 1980 with its current title of “Post-it Notes.” In 2010, Silver and Fry were inducted into the National Inventors’ Hall of Fame for their Post-It Note idea.

Runyon said, “3M developed Post-it Notes without any input or inspiration from Mr. Amron, and it is false and misleading for him to state or suggest that he created, invented, or had any role in the product’s development.”

Amron is seeking compensation and damages of $400 million in his most recent case.

3M’s attorneys are currently reviewing the lawsuit and will file a response to the court in the near future.