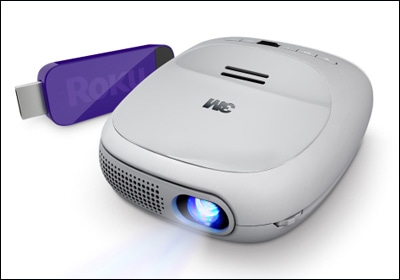 3M Company recently announced that it has teamed up with Saratoga, California-based Roku, Inc., to create a “first-of-its kind” video projector designed to project streaming content from Netflix, Hulu, Amazon, and other providers.

The projector, which is small enough to fit in your hand, features built-in Wi-Fi. It comes equipped with a Roku Stick, a thumb drive-like device that allows users to tap into the Roku platform, which gives users access to more than 600 channels of streaming video, music, and games. Some of the channels, like Netflix, require paid subscriptions, while others, like Crackle, offer free content.

The 3M Streaming Projector can project an image up to 120 inches (measured diagonally, as is traditionally done with television screens) onto a variety of surfaces, including walls, ceilings, and sheets. The device, which has a battery life of up to two hours and 45 minutes, is currently available for pre-order at amazon.com for $299. The product will be released on October 22.

“Thanks to our partnership with Roku, we are excited to introduce an affordable streaming projector that delivers both a high-quality viewing experience, as well as easy access to a wealth of entertainment,” Mark Colin, vice president and general manager of 3M’s mobile interactive solutions division, said in a statement.

A 3M spokeswoman declined to disclose the financial details of the partnership with Roku. But the streaming video market could represent a significant opportunity for the company. For example, Netflix alone had more than 27 million subscribers to its streaming services as of late June.

Maplewood-based 3M is among Minnesota’s five-largest public companies based on revenue, which totaled $29.6 billion in 2011. It employs 84,000 people worldwide and has operations in more than 65 countries.