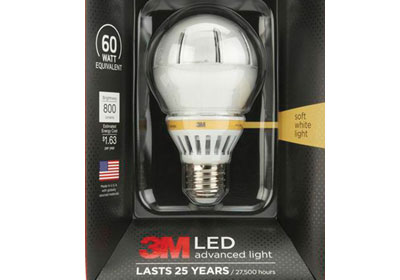 3M Has A Bright Idea For LED Lightbulbs

While the environment is a clear winner in the phase-out of incandescent light bulbs, their replacements have not caught fire in the marketplace…

The Maplewood-based company set out to develop an energy-efficient, high-tech bulb that emits soft, natural, uniform light—essentially replicating the look and feel of traditional incandescents. The result is the 3M LED Advanced Light, which hit shelves last fall for around $25.

While the product marks 3M’s first foray into consumer light bulbs, “We saw that lighting could benefit tremendously from fundamental technologies we had developed for other purposes,” says Ray Johnston, a longtime 3M scientist and the bulb’s inventor.

The bulb uses 3M’s multi-layered optical film, thermal materials, adhesives, and a “light guide”—a structure that captures light to be disseminated through a strategic pattern of “extraction points,” resulting in broad and even light distribution. 3M’s “is the only product out there that does this,” Johnston says, adding that the technology builds on techniques 3M uses for backlighting television displays.

The bulbs, which are manufactured in New Ulm, are supposed to last 25 years and use a quarter of the energy of incandescents. They’re dimmable, and heat-releasing vents keep them cool to the touch.

3M is adding products for commercial settings, says Shevlin. It recently took gold at the Edison Awards, a national innovators honor named after the inventor of the very bulb that 3M’s product is meant to replace.